As planned, on April 30 Ubisoft company released the trailer of the next part of the famous Assassin's Creed series, the release of Assassin's Creed Valhalla is scheduled for the end of this year.

Literally next day several large resources published interviews with the developers, they touched upon different topics concerning the upcoming game.

In this article I tried to collect information about some features of new Assassin's Creed part. I drew on the official website and voluminous material from Game Informer, GameSpot and Eurogamer to compile the text.

I also want to remind you that the gameplay is supposed to be demonstrated at the Xbox conference this Thursday, May 7. 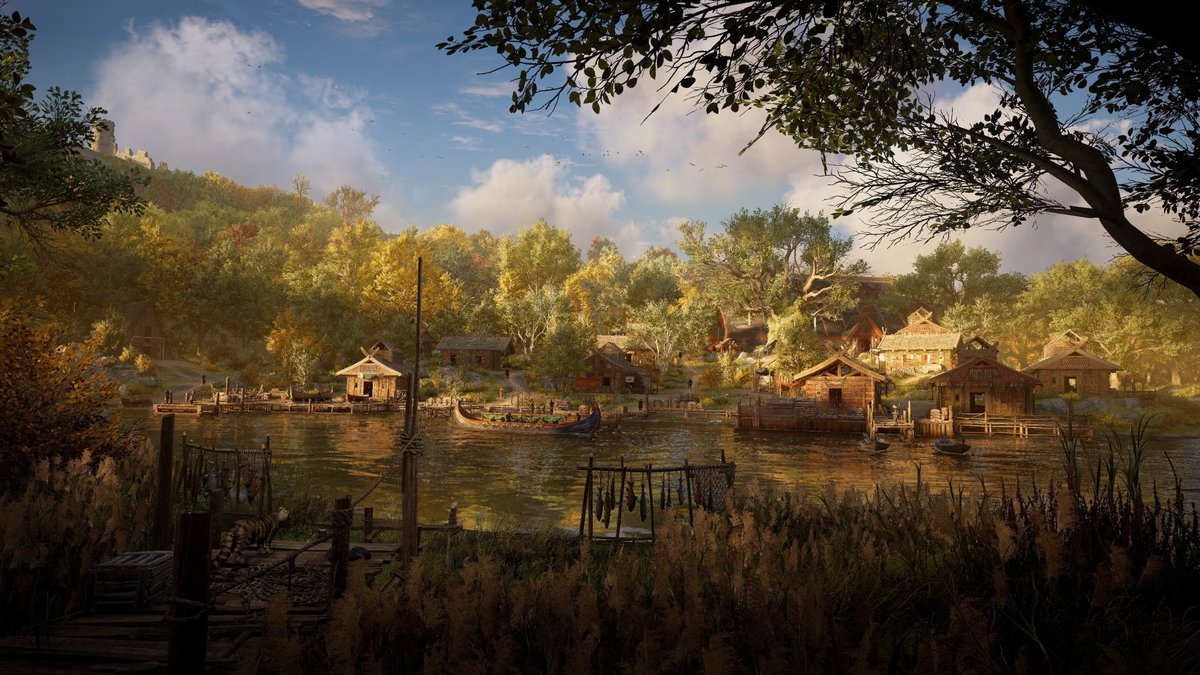 Like the Odyssey \ Origins, the new part includes aspects of mythology (Scandinavian), but unfortunately the developers don't want to talk about this aspect of the game in detail. The main characters and his comrades-in-arms definitely believe in gods, but whether we will have to meet them \ is unknown. In previous games this feature was present and even was part of one of the additions.

The protagonist of the new part will be the Viking Eivor - a warrior leading his people from Norway to the lands of England. As in Assassin's Creed Odyssey, users can pass the whole game for the male or female character.

Recently it became known that both characters regardless of gender are canons, if you remember, in Odyssey only Cassandra was considered as canon.

King Alfred of Wessex will play the role of antagonist, but the most interesting thing is that he is not the main "villain", whose name, of course, is unknown. The most obvious option is the following: the king is just a puppet in the hands of Templars, this conclusion can be drawn from the trailer game (a very suspicious fatty near the king).

The game is available four kingdoms of England in the 9th century: East England, Wessex, Northumbria, Mercia. Players can visit several major English cities: London, Winchester, York. In addition, you can return to Norway at any time.

During the main campaign there are several important decisions to be made, but each has a consequence and can lead to unusual developments, so you need to be very careful. For example, depending on the player's actions, an alliance between clans will lead to the development of romantic relationships.

To explore the world of the game will have to be both on land and at sea, and the latter aspect is very different from the same Odyssey, because the Vikings used ships more as a means of transporting warriors to the desired place. That's why the sea content will be different from the usual "Ship vs ship" scheme, otherwise such a battle will end very quickly with a deplorable result.

As the exploration of the world the player will have to capture different settlements and entire fortresses to increase the territory and valuable resources, but unfortunately, how exactly will look like this content is unknown (I can only imagine two options). However, precisely mentioned the fortresses located near the water, to capture them will need a ship.

You won't have to capture the settlements by yourself, you'll be able to help your comrades-in-arms, which Eivor will meet during the adventure, or mercenaries created by other characters. The latter refers to the online features of the game, each player can create your own unique Viking and expand it among friends, this will allow to receive awards. 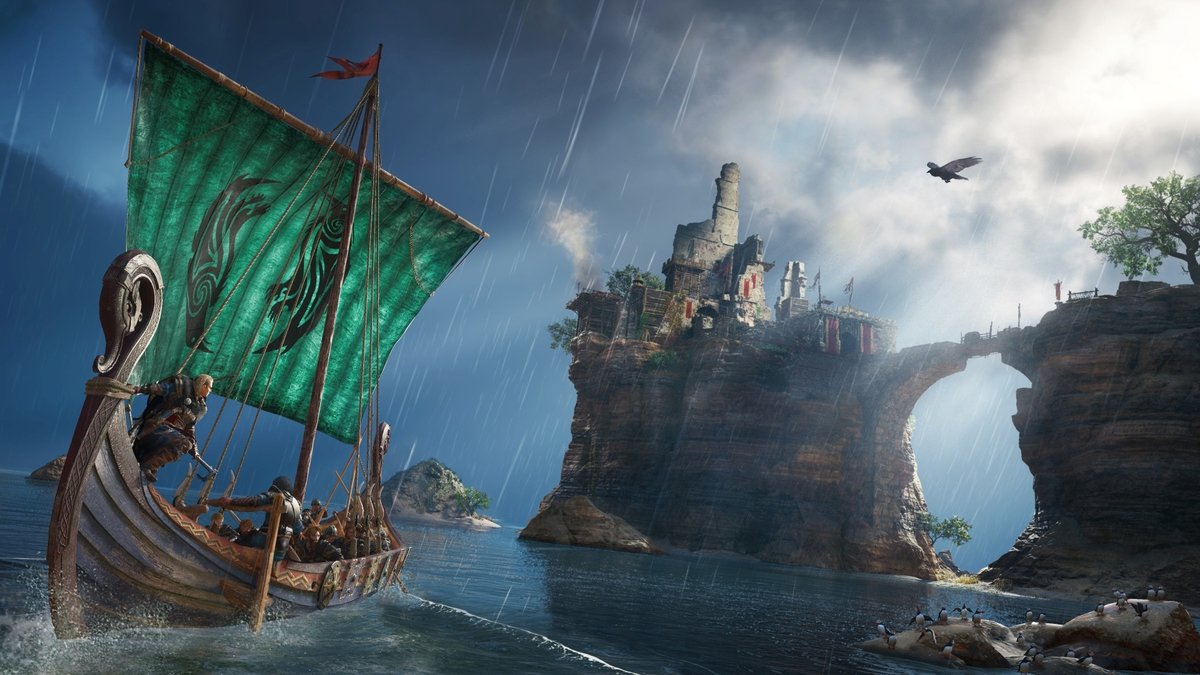 Resource extraction allows improving your own settlement, which is another key feature of the new part (something similar has already been seen in several parts of Assassin's Creed). As the settlement grows, new improvements to the buildings open up, most likely they will replace some of the player's systems.

In general, Ubisoft wants to make this system more advanced than its earlier counterparts.

Side activities include hunting (you'll probably have to destroy several complex creatures again), fishing, playing dice, drinking more, and even taking part in so-called Flyting, a kind of rap battle (at least that name fits the description of this "ritual" on Wikipedia).

In the latter case, you will most likely have to choose one of the answer options for a certain period of time, a kind of quick time activity.

Following the latest trends, the eagle's vision is still replaced by the bird, only this time the raven will be the right companion. This change is most likely caused by the Vikings and Odin in particular.

The RPG system has been redesigned:

The combat system will change to a certain extent to fit the Viking theme. It will become more brutal, allowing the character to behead, stab and dismember his opponents (hence the rating 18+). In general, users should feel the "Ultimate Viking Experience".

Shields (quite logical) and a hidden blade (in an unusual, suitable for Vikings form) will return to the game.

If I understood correctly, the new part will finally bring a normal system of paired weapons. The last two parts added a new archetype of paired weapon, which was essentially a pre-prepared set of weapons of the same type.

This time the term "paired" means the ability to equip weapons in each hand separately, so instead of the standard combination of sword + sword we have already shown a variant of sword + mace (although in the picture the sword is more like a two-handed, which is very strange). 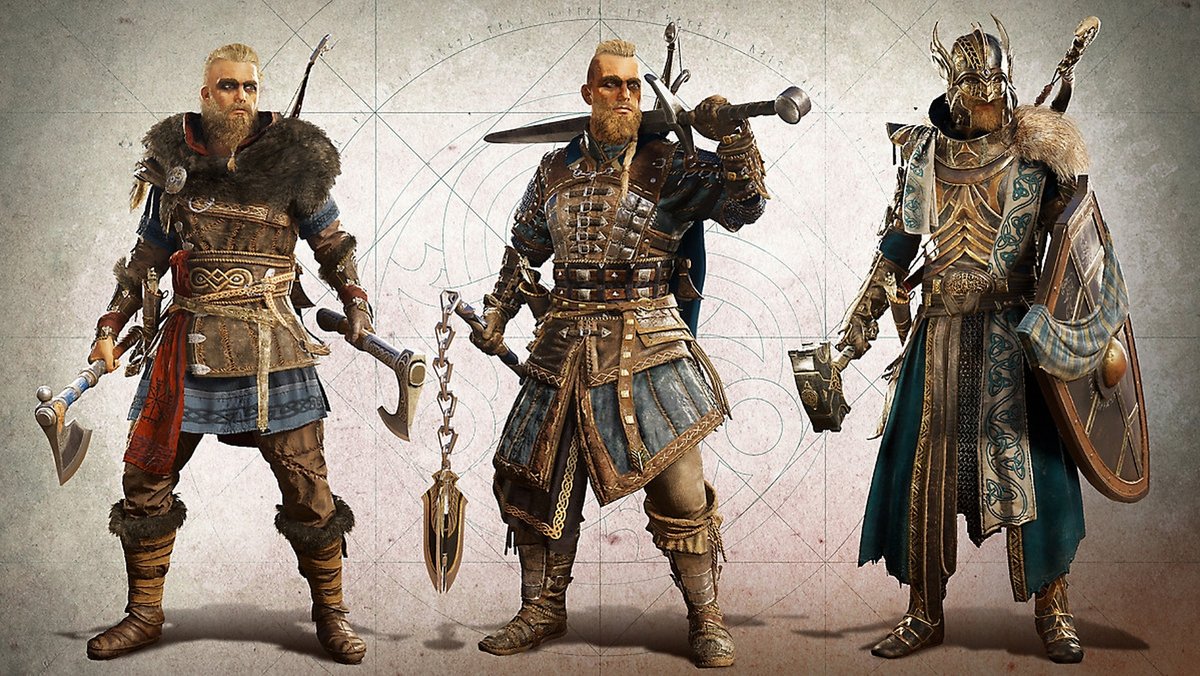