A new location saving system has been announced in EVE Online this year. Another long-awaited change is alliance bookmarks, the idea of which later turned out to allow sharing your bookmarks with everyone. CCP Games did not want to discriminate non-alliance players, so the update will be big.

Currently 102 Capsuleers have got 20 000 bookmarks and more, there are 12 players who have over 50 000 locations. The biggest of them is a record-breaker who has somehow made 355 374 bookmarks all around New Eden. As they might have troubles adjusting their locations to the update, they are asked to cut them down to 15 000 or so. 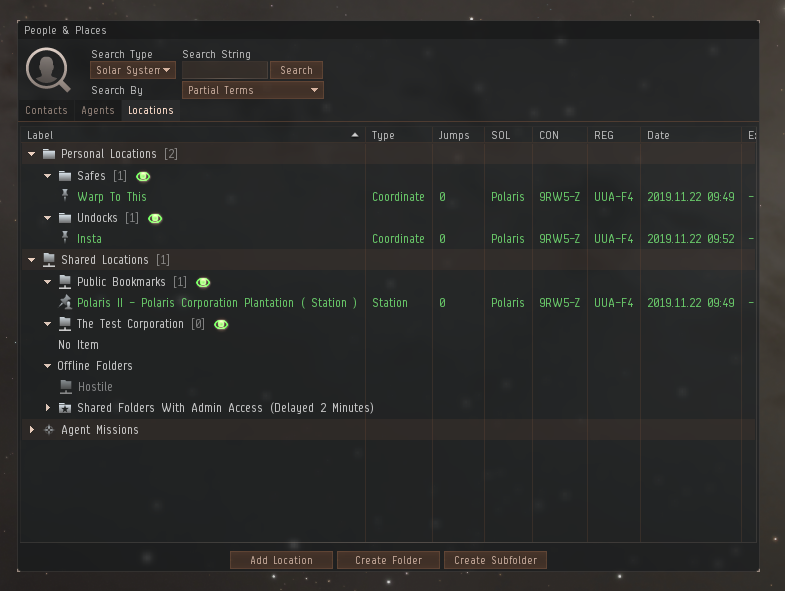 The following options are used to set access to folders: 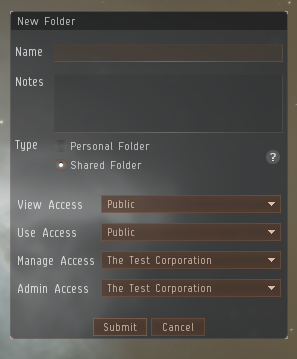 Folders can now be marked as online or offline.

Expiration of bookmarks has undergone some changes as well: 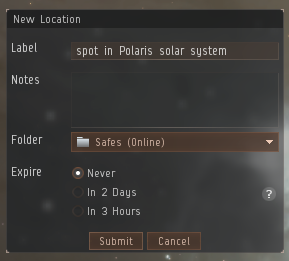 When you add, delete or change shared units, it applies for all players to which it's available. Warping to new bookmarks is possible in 2 minutes after it’s created instead of 5 minutes before the update. Before a bookmark is ready, players cannot see it. Access changes may take 5 minutes or so to be applied because of possible performance issues.

The client performance, as well as the server performance, was an essential problem for CCP Games. There is so much data to process that it has a bad influence on the network. Previously Capsuleers with too many bookmarks had some performance trouble. The team has managed to tweak some areas, but they also have to introduce a few restrictions to be sure the system is more or less safe.

The limitations allow one to keep up to 15 000 enabled private locations and up to 1 500 public ones. Besides, the frequency of system changes to folders is restricted to prevent any intentional effort to attack the server.

As the developers have done a great deal of work already, they seized the opportunity to make some UI changes.

On a right-click all bookmarks are organized as ‘Locations’. It helps coordinating them with other menu entries and keeping the interface tidy. You might need to get accustomed to that a bit, but in perspective it should make navigation easier.

New bookmarks will not be accessible by side software at first. Unfortunately, the team needs to see to everything working as planned. More information will be shown in the developers’ blog. Side programs will show empty pages instead of 404 errors so the players are not misinformed. The issue will probably be fixed soon enough.

Such an immense system change will surely have some influence on the game world, and the developers intend make it as little as they can. The checklist is to:

Location vouchers will be turned into common bookmarks except for the vouchers in a contract. They will be located in the ‘Imported Vouchers’ folder in your private folder or in the corp’s public folder. Unluckily, these vouchers' origin won't be identified by any notes. Vouchers in contract are not bound to an owner. To prevent contracts from being broken, the vouchers will transform into other things.

You're probably not the guy who owns 350 000 bookmarks, but if you have an impressive number of them, it is possible that you've still got more folders than allowed. You'll probably need to cut the number down a bit after the update.

Some bookmarks may be hidden from Capsuleers because of restrictions. For instance, a group can show only 3 000 locations, no matter what type of folder it is. Besides, you can download no more than 20 000 bookmarks.

The team hopes that the information exchange between alliances and other organization will increase after the update. It has a lot of exciting things to make up for the long wait. For a conclusion, some curious numbers.

Before the Migration there are: