For almost three years, the employees of Dynamight Studios have been working on the unusual Fractured MMO sandbox. During this very impressive time they managed to develop several key mechanics, but unfortunately the project is still in the alpha-testing stage.

Last Friday I managed to get to the next stage of testing (Alpha 2 - Test 2) and, as far as possible, to study the game in details. In this article I tried to describe the available mechanics of \ the peculiarities of the project and also my personal impression of the gameplay.

At first a bit of basic information for general awareness: as I mentioned at the beginning, the game belongs to the sandbox genre, but there are also survival elements expressed in food and energy. The camera is located above the character, i.e. in isometric style, and can be removed at a decent distance to cover more territory around it.

The game lacks such fundamental RPG elements as raising levels and improving performance, instead, the development of the character goes a slightly different way. In the current version of PvP is present (activated by a button), a full loot system is kind of like that too.

Also below you will not find a mention of the combat system for the following reasons: the server is still only in America (judging by my ping from 100 to 200-300), I played the magician and basically "plug" opponents with a staff or kaitil magic. To be fair, it is worth mentioning that the kickstarter campaign mentioned the interaction with the world around (fully interactive environments), but did not notice this (perhaps badly sought). So far, it looks simple to me and is tied to knowledge.

Before diving into the fascinating world of Fractured users are offered to create their own alter ego. So far, only one race is available (in the future the list will consist of eight, although some are subraces), male \ female sex and several settings for the appearance of the character (face, hairstyle, skin color). In general, this is what an editor for games like this should look like, I do not think that in other isometric projects, players often look at their characters close up.

Having successfully chosen the gender and appearance of the character, we proceed to the setting of his biography \ history, such an unusual term the developers veiled the choice of the main character class. The classes differ among themselves by the following criteria:

You should pay attention to the last point, because the characteristics can not be changed after the creation of the character, the game simply does not provide the function of their amplification (this is an unusual feature). In other words, they do not change throughout the gameplay, at least for now it should be so. I honestly don't know how to deal with it, and that's exactly what it is. 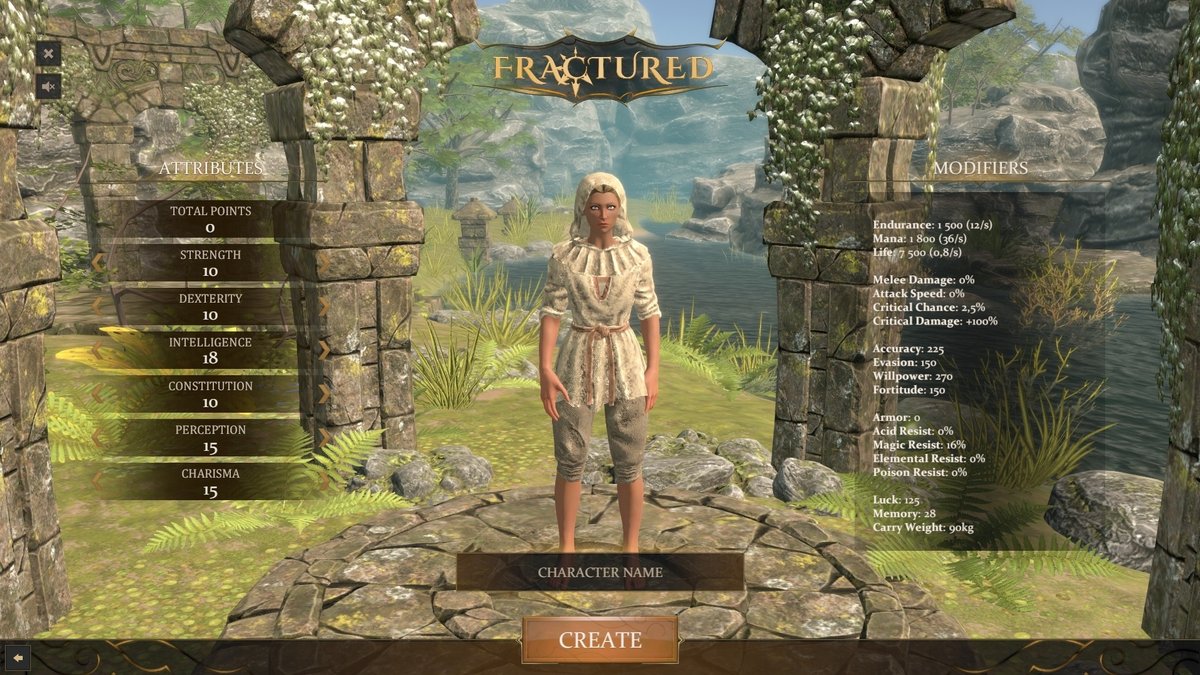 In the current alpha there was only one world available (if I understood correctly, there will be several) and a large island called Myr. Despite its small size (see picture below), I was never able to explore it completely, probably because it would take a huge amount of time due to lack of any means of transportation. Basically, because of the above mentioned problem, there is nothing to tell me. 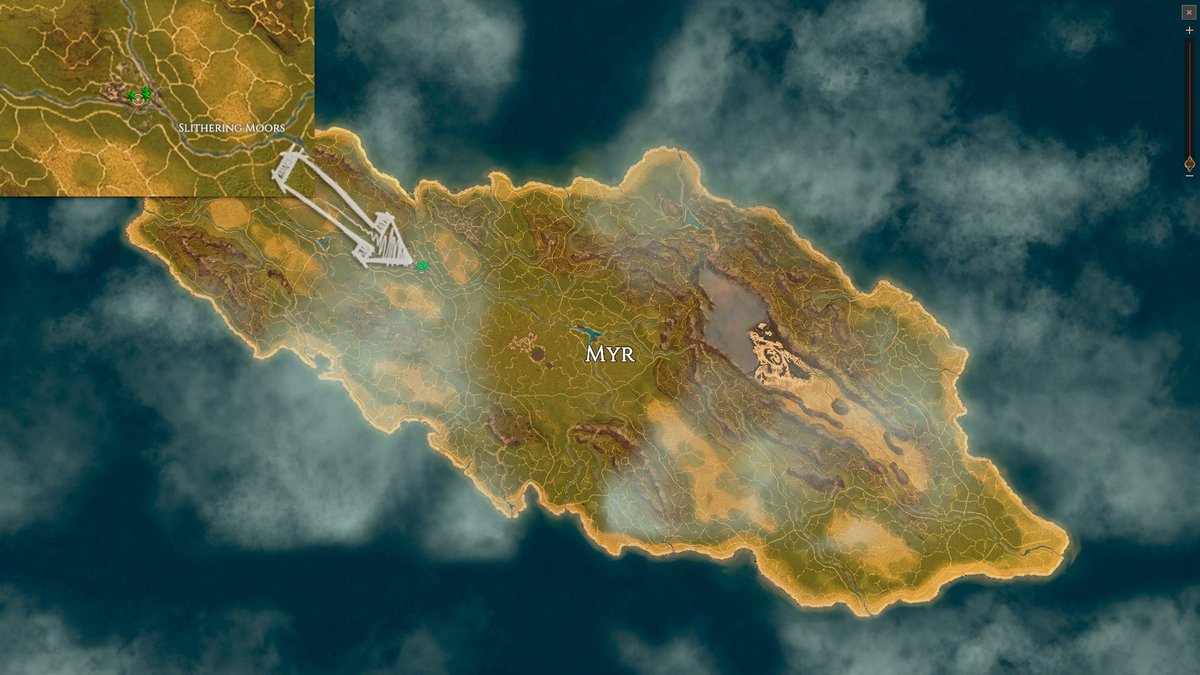 One of the key features of the game can be called a knowledge system, already now it is able to provide a lot of single \ party content, if the developers implement everything correctly.

When a character interacts with different objects in the world, you get valuable information, which is recorded in a special "Book of Knowledge", as well as a certain number of knowledge points (250 at the first interaction, and subsequent much less).

The interface of the book so far contains only two tabs - resources and bestiary:

The knowledge system is the first element that determines the level of development of the character, in other words, the expression "Knowledge is power" is appropriate here. As I wrote above, some creatures in the world of Fractured have abilities that they use in battle, their number depends, so to speak, on rarity.

With each kill, there is a certain chance that a character will be able to remember one of the abilities (if there are several) and add it to the book of knowledge. Only in this case, for a certain number of knowledge points, it can be unlocked and used as its own ability.

This way, the user can learn a huge number of abilities, but the only way to "use" some of them is because of memory constraints - each ability has a number of memory points at the bottom right.

And the abilities are not tied to a certain class, only to \ armor. This allows the warrior to use the Fireball, while the Mage can use the Mesh to temporarily immobilize his opponents.

The result is that in addition to the standard scheme "Enemy = Loot" added another "Enemy = ability", and the developers decided not to drive players into a "solo" frame, because the knowledge is obtained by all members of the group. Thus, messages like "I will gather on the RB for the sake of ability" may become quite real.

It should be noted that all of the above is just one way to learn a new ability, if you believe this information, there will be much more, ranging from "Get X blows" to "Use X items". 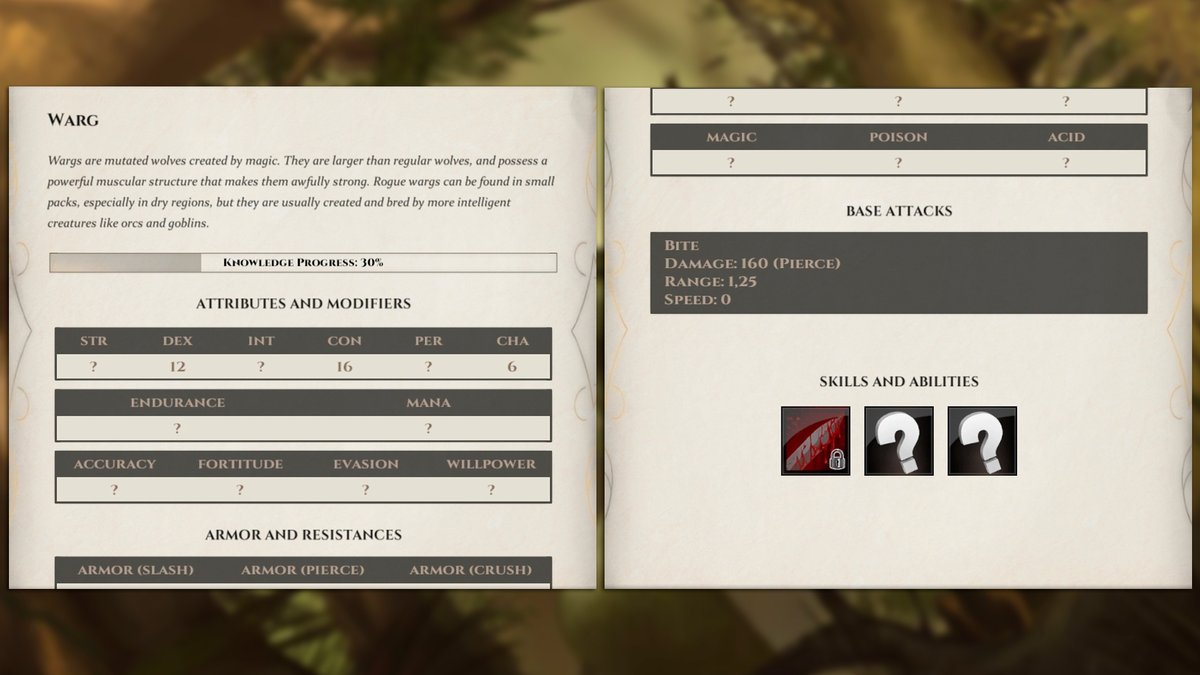 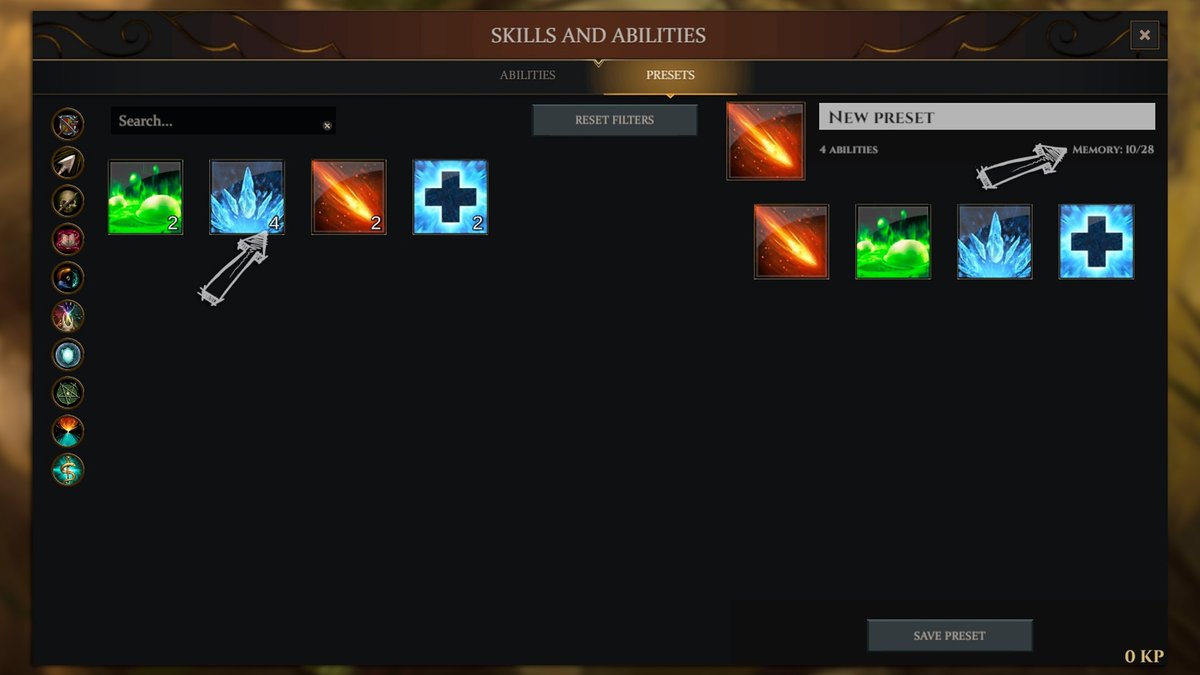 The character has five key indicators:

How easy to guess, for the survival of the character are two indicators - energy and satiety. Recover them is quite easy, but for this you will have to collect, and even better to store (by the way, the food in the current version does not spoil), certain resources scattered around the world.

Resources can be divided into two types: 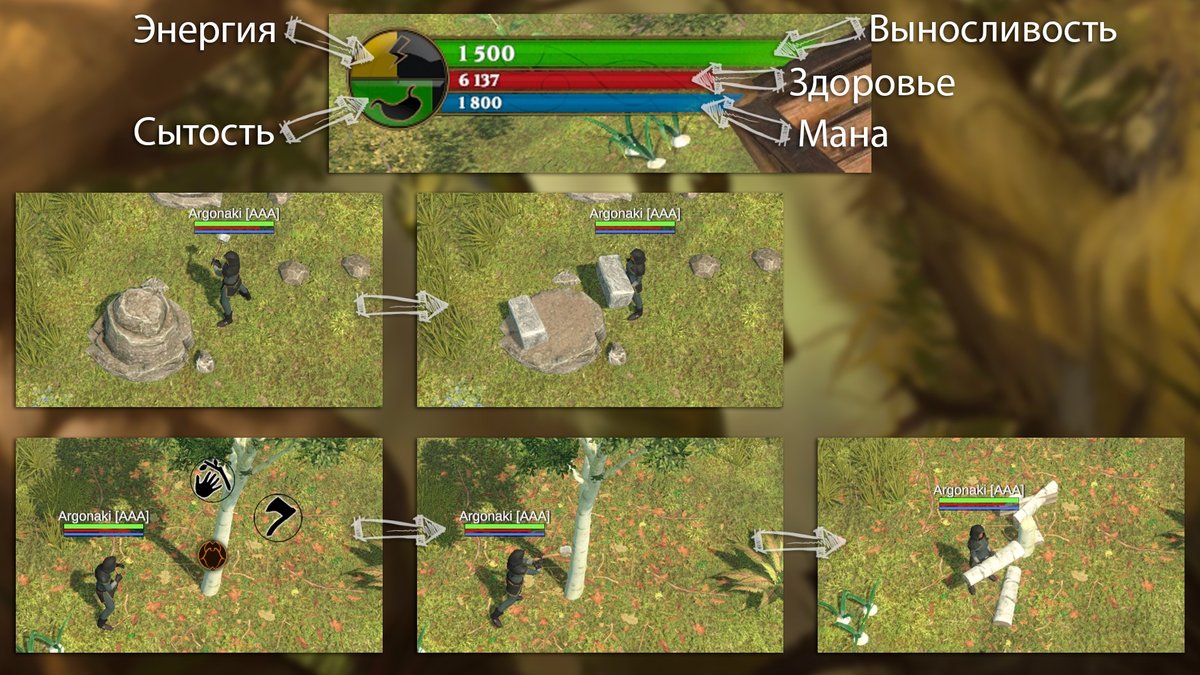 The character from the first minutes of the game is able to create basic items such as primitive weapons \ equipment, primitive tools, initial Kraft resources, medicinal mixtures. As for the Kraft itself, it is as simple as everywhere else, the player is enough to find the necessary resources, and if necessary, Kraft machine. For example, food can be prepared only at the source of fire (meat from animals), advanced armor - on a workbench (tissue from plants, leather from animals), etc.

From the unusual it is necessary to distinguish only the arrow, you need to scrape the tip and the shaft separately, and only then the arrow itself.

The characters also have access to various facilities, including: all machines for more advanced equipment \ resources, base fire \ roaster for cooking, several variations of houses, decorative objects, etc.

Unlike Kraft, the structures initially look like transparent blue drawings (visible to all users). After placing it is necessary to bring a certain number of simple \ complex resources, Kraft resources. 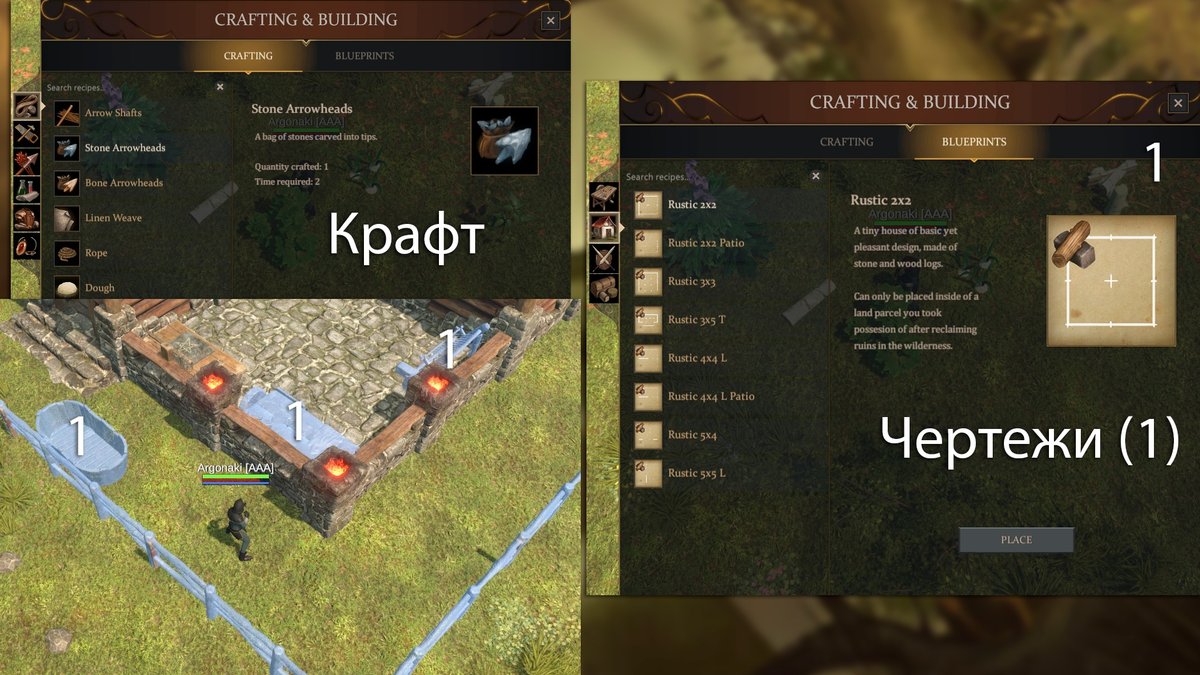 The following applies to the direct equipment in the game:

They differ in the following indicators: type (e.g. light or medium, applies only to armour), additional effect (e.g. increase in critical damage, only in costume jewelry) quality, affinity, resistance to type of damage, strength and weight.

As it becomes clear, the equipment cannot increase the basic characteristics of a character or, say, increase protection, but instead it can be enchanted (improved) several times by giving additional properties. This process looks very interesting.

First, you need to create a table with the same name, then place in it any of the items described above (except for the arrows) and see that the list of possible improvements (it changes depending on the type of equipment) appeared on the right.

Under each improvement is four runes, you need to make sure that each was at least the second level (they are displayed as divisions around the runes), to make improvements to the equipment. To do this, in addition to the central slot in the interface of enchantment there are five more, which are placed special reagents (bones, body parts, flowers).

The main problem is that not all items can be used for each type of equipment, the exception are items with the attribute "universal". Thus, the user only needs to find reagents for the necessary enchantment.

So far I can say one thing: I liked the principle itself, but the implementation is still limping in terms of functionality and convenience (let's write to the alpha stage). 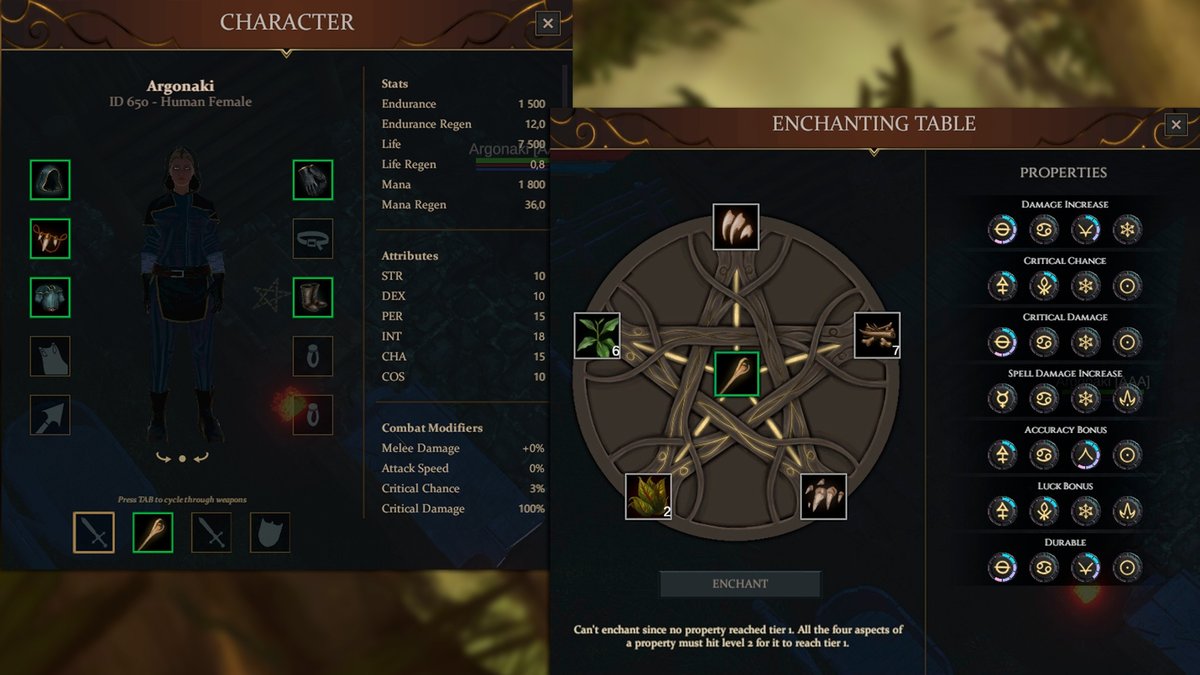 The final part of the alpha content is the opportunity to purchase a personal plot of land (one per account so far), then build a house and furnish it with various items ranging from craft machines to bed decorations.

Perhaps that's what I killed for a few hours, doing the following things: first, you need to mine 500 gold, which can only be done by killing monsters (according to advice from the chat grindyl goblins), then a lot to run in search of an empty plot of land (the mini-map is displayed in yellow square).

Successfully acquired a personal piece of land, open the interface Kraft, then tab construction, choose one of the eight variations of the house and finally place the drawing at the desired location. Only now you will start building the house directly, and if to put it more simply, slow AD will begin.

The process of building a house in the world of Fractured can be exaggerated into about these stages: foundation (columns), foundation (partitions), floor, supporting beams for walls, walls, door \ doors.

Everything will require exceptionally complex resources in huge quantities, which means that you will have to make several flights (only 12 pieces fit in the cart) in search of the right materials (provided that you have chosen the right place, not like me, at a distance from everything and everything).

On the other hand, even if the player is not the owner of the plot, he can take part in the construction, for this reason the easiest way is to team up with friends to quickly build a large house and then issue the rights to use the property. 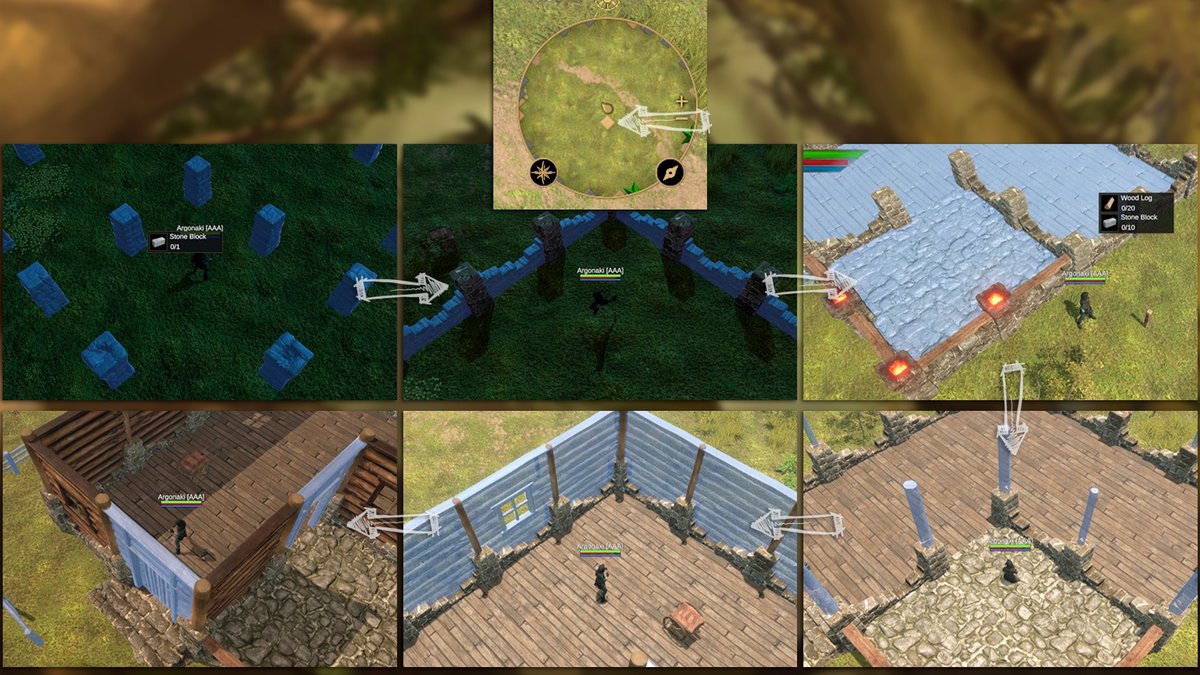 To sum it up, certain aspects of Fractured look quite interesting, but I wouldn't go ahead and say "Genius! This is a masterpiece!" because of the obvious problem and lack of basic functionality. The game will definitely take a huge amount of time (like all \ sandboxes actually) and it's better to bring a couple of friends with you.

The project is definitely worth watching and seeing how quickly developers can make changes, as well as implement all their ideas. It seems that already in the next stage of the alpha will appear cities of players.