It's been a tough week, and we have something to tell you and show you.

Let's take the already known route: a little bit of dynamics at the beginning, then pictures and text, and finish with a little video.

Continuing the theme of Report 15, we will show the movements of the Minotaur. Before viewing it, please note that it is between 3.5 and 4.5m tall.

Death. When these big fellas fall, the camera will shiver at players nearby.

And then there's the "ram" that sends a lunatic hunter to respawn.

Furious screaming and stomping. The player's camera shakes, and his knees are smothered (consider adding a modifier to the energy of the characters within a radius of n meters).

In addition to the weapons editor, the game will also be a solid weapon, you can not disassemble these models, but the materials almost everywhere you can change.

Let's go as the average length of the blade from the daggers to almost two meters of zwei:

We have already shown in the Report #19 the models of robots, which are included in the sets of Predorder. Now it is time for shields, helmets and weapons (from daggers to huge double handles).

We remind you that these are only "skins", ie, for their use it is necessary to have a game item of the appropriate type (and often, even the level), and after that a specially trained NPS can apply a skin on the game item.

Let's get a little distracted from the models. And then we are definitely calling for comments and discussion. We decided to prepare new sights for pre-Alpha, which will not only tell you what kind of weapons you have in your hands, but also look a little more suitable for playing with the combat system of both close and far combat. 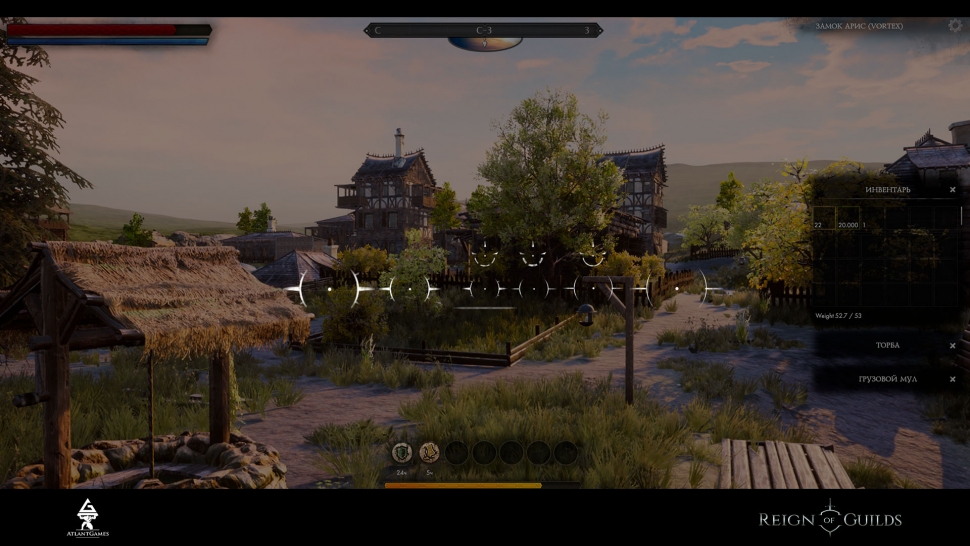 1. 3 magic scopes on top (we're still picking, but we're leaning towards the left one). When you use "on yourself", the upper part of the sight and the dot will change to an icon with the silhouette of the character (and, yes, the male and female characters - different silhouettes).

2. Next comes the 6 sights for close combat weapon:

3. Under the third on the left side of the sight there is a new line for kuldaun (Reloade or Preloade). We have tried different options, including a circle around the sight, but the line gives the most accurate representation.

IV. The first steps in the Kingdom of Dvorran

Well, friends, we are proud to announce that we have completed a very important stage for us - we have finished the work on merging the main project and the project with the game world, and most importantly, we have corrected 100% of critical errors that block one or another functionality of one project (and sometimes two at once!).

It all means that we have come close to pre-Alpha.

Here is the first small video.

There are some problems with quality - we will rezalom in the next few days and let you know so that you can evaluate it in full quality.

What do we want to say in the conclusion of a fairly responsible report for us? First of all, the report is late again, but this time because of the strict desire not to publish without video content, which even we have already missed.

Secondly, we have taken a clear course on pre-Alpha, the work plan is written with checkpoints, once every 2 working days at the most.

In the next report you'll find new mobiles, a few funny animations and ... a huge castle from an empire that has fallen into history.

That's it! Watch the video, subscribe to our channel (there will soon be a wave of video telling about game mechanics).