I unscrupulously cut down forests, mowed geese and goats, trampled Bengali tigers with cavalry, cut through medieval villages on tanks and built wonders of the world - about this in War Selection review.

Free pseudo-historical RTS, similar to Age of Empires and included in the list of the best free games in October in Steam? "Give me two!", I thought, and immediately downloaded that miracle. Surprisingly, War Selection weighed only 770 megabytes and was launched in a couple of seconds. I played it for hours and got to know the basic mechanics. I was in a hurry to share my impressions.

The project is still in early access, so some modes are not available. However, their description is already present, so I will list them all:

The main menu also has an option "Play squad" - it allows you to invite friends and start any match with them. Now this feature is free, but in the future it will be paid. Otherwise, there are no hints at the donation yet.

Classic RTS with base construction, economic development and real-time combats. Beginning with the Stone Age and managing the Neanderthals, you can gradually develop and eventually reach the era of industrialization, even gaining access to tanks. 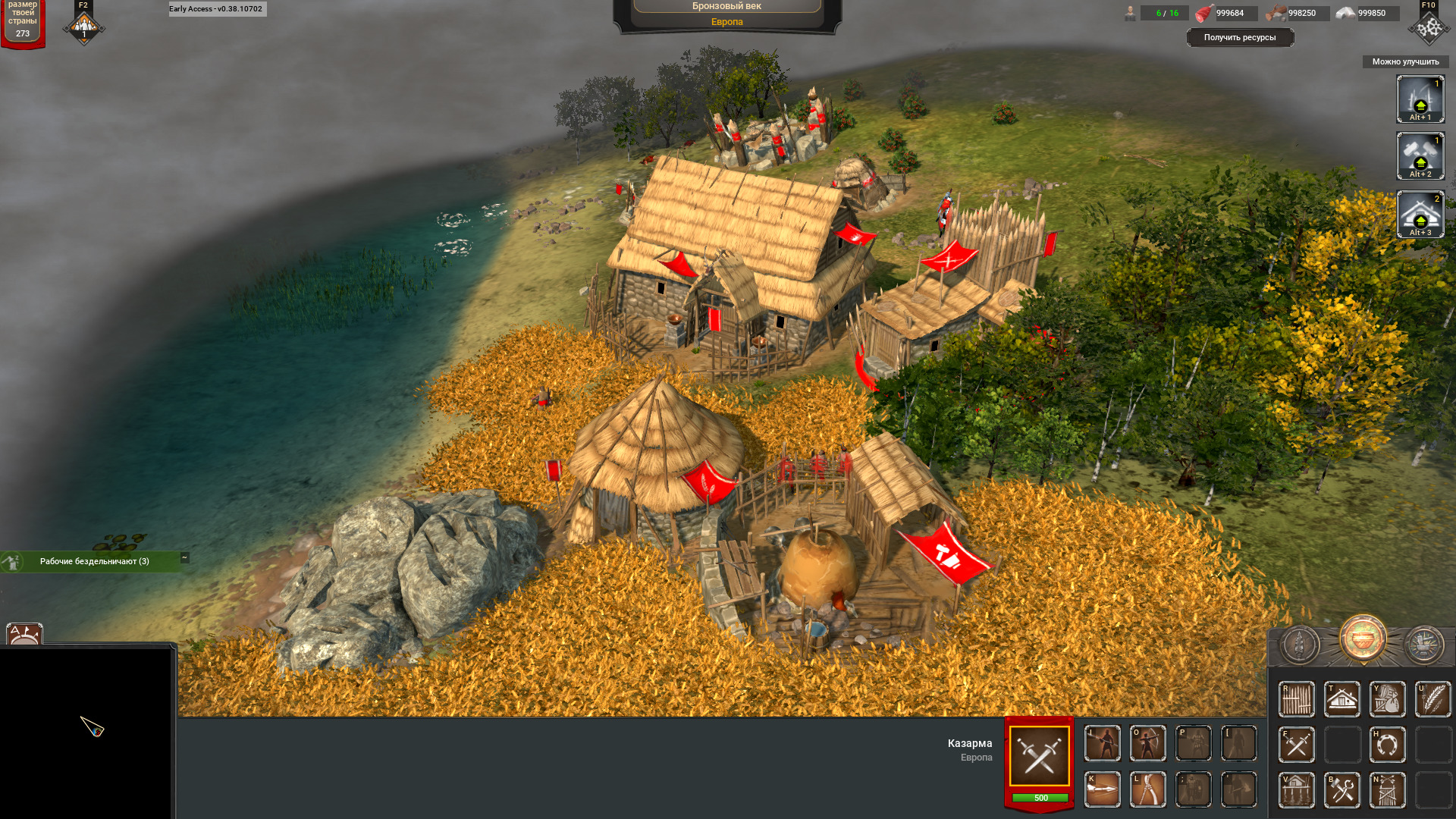 At the start, everyone usually builds a bunch of workers and extracts resources. The resources include forest, food, stone and metal. Depending on the chosen strategy and its requirements, you need to keep track of the number of workers sent to mine each resource. By gradually developing, production can be optimized. For example, building a wharf with fishing boats will allow you to fish, not just reap wheat and kill geese. Or you can hire a tractor - it will be noticeably faster to collect wheat. As long as optimization does not concern all resources, in most cases dozens of workers will be needed.

Transition to a new era is possible after accumulating the necessary amount of resources. As soon as this happens, a new construction branch will be available. After that, the buildings of the past era, troops and peasants can be upgraded. This is convenient for a number of reasons: there is no need to spend money on new buildings, while destroying outdated ones, the peasants become more experienced and can build actual buildings, and the army is noticeably strengthened. 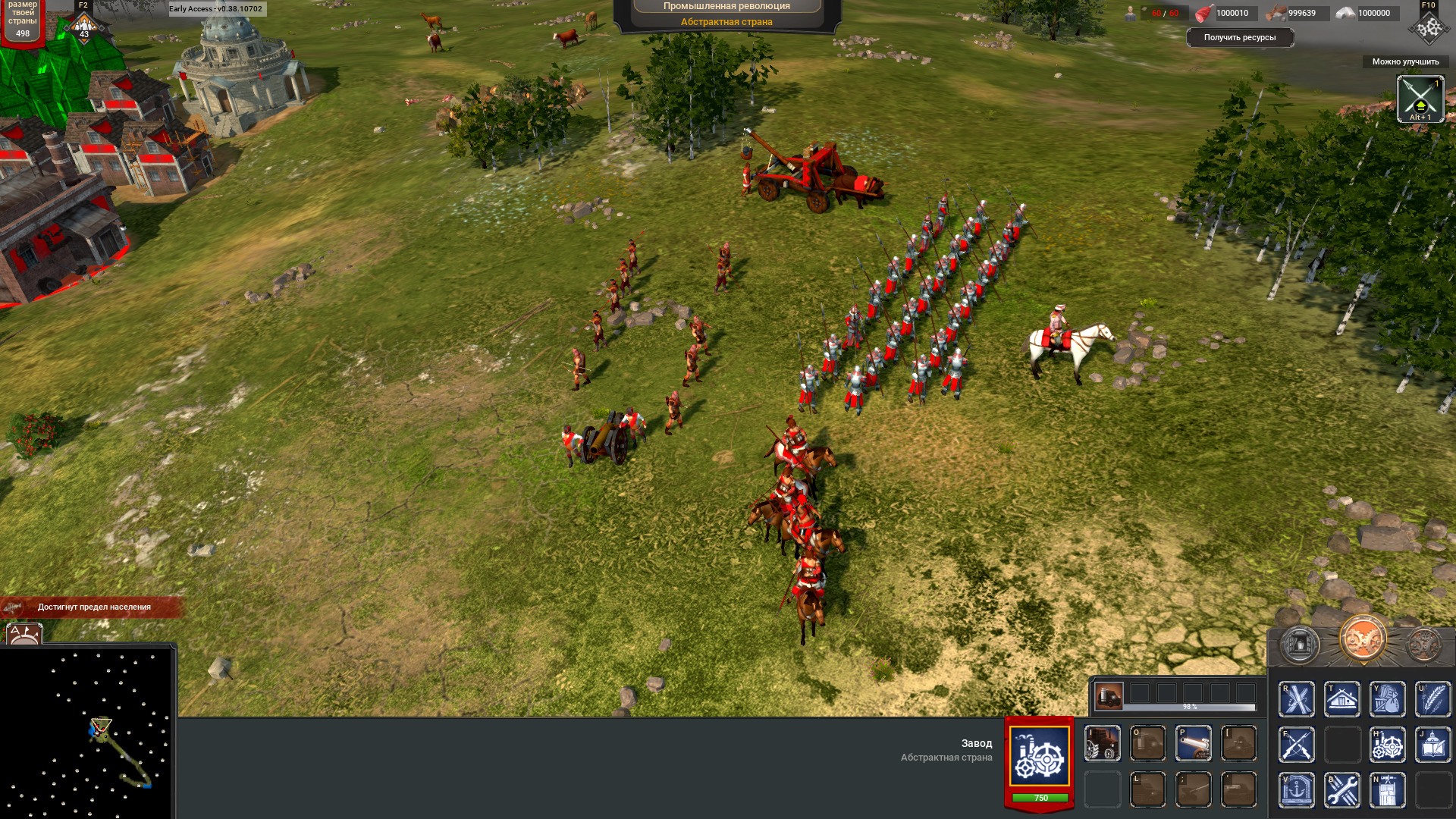 In addition to economic and military buildings, there are strategic such as castle walls, combat towers, anti-tank hedgehogs, stationary demandos, etc. There is also an impressive difference between different cultures. When developing, you can choose the cultures of Africa, Europe, America and Asia. But only until the Middle Ages. The transition to the industrial revolution is still available for the "universal state" - a collection of salt from all cultures, which serves as a playground holder, while individual cultures are still in development. In the future it will be possible to develop cultures not only of the continents, but also of individual countries such as Spain and France.

The choice of culture determines the style of gameplay. Asians are famous for cavalry and are dangerous with their rapid cavalry strikes. Europeans rely on heavy infantry and experienced shooters with crossbows/races/autoes. I have not played for the Africans and Indians, but I have seen other players spam archers for these cultures - apparently they are very strong. 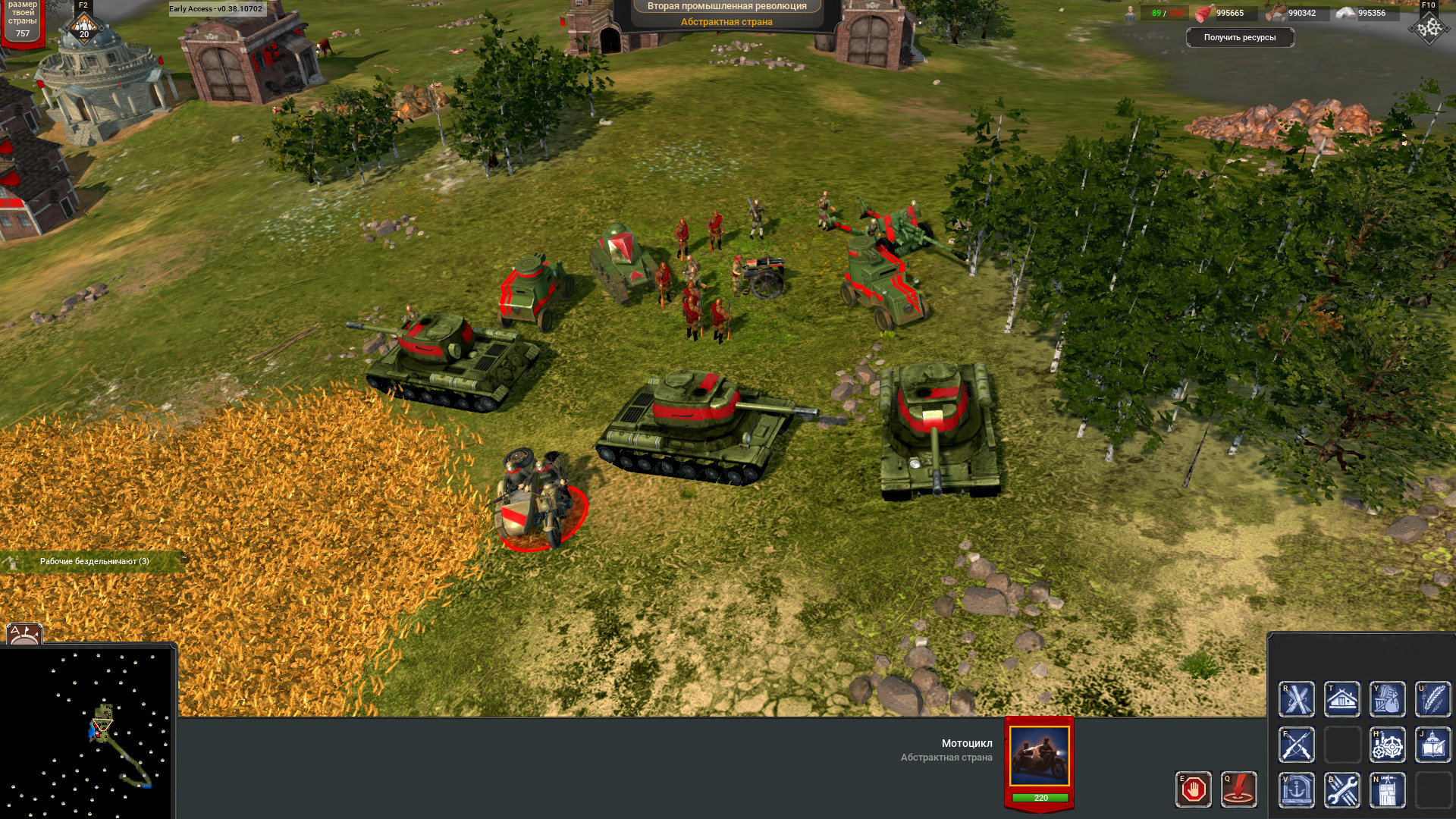 Most of the battles are on the same plan - the first ten minutes of active recruitment of farmers and strengthening the economy. Then a systematic transition from one era to another with the training of small military units for defense or raids. And at the end - the creation of guns, tanks and machine gunners, making up the elite of troops, which will not resist even the thick castle walls. Who will be able to intelligently allocate resources and quickly develop to the elite, will walk through the enemies like a steam roller.

I liked the map scouting feature. In the early days, you can only scout the territory of the kingdom, and at later stages to get information about the location of enemy strongholds. It's a long exploration, but it's worth it. 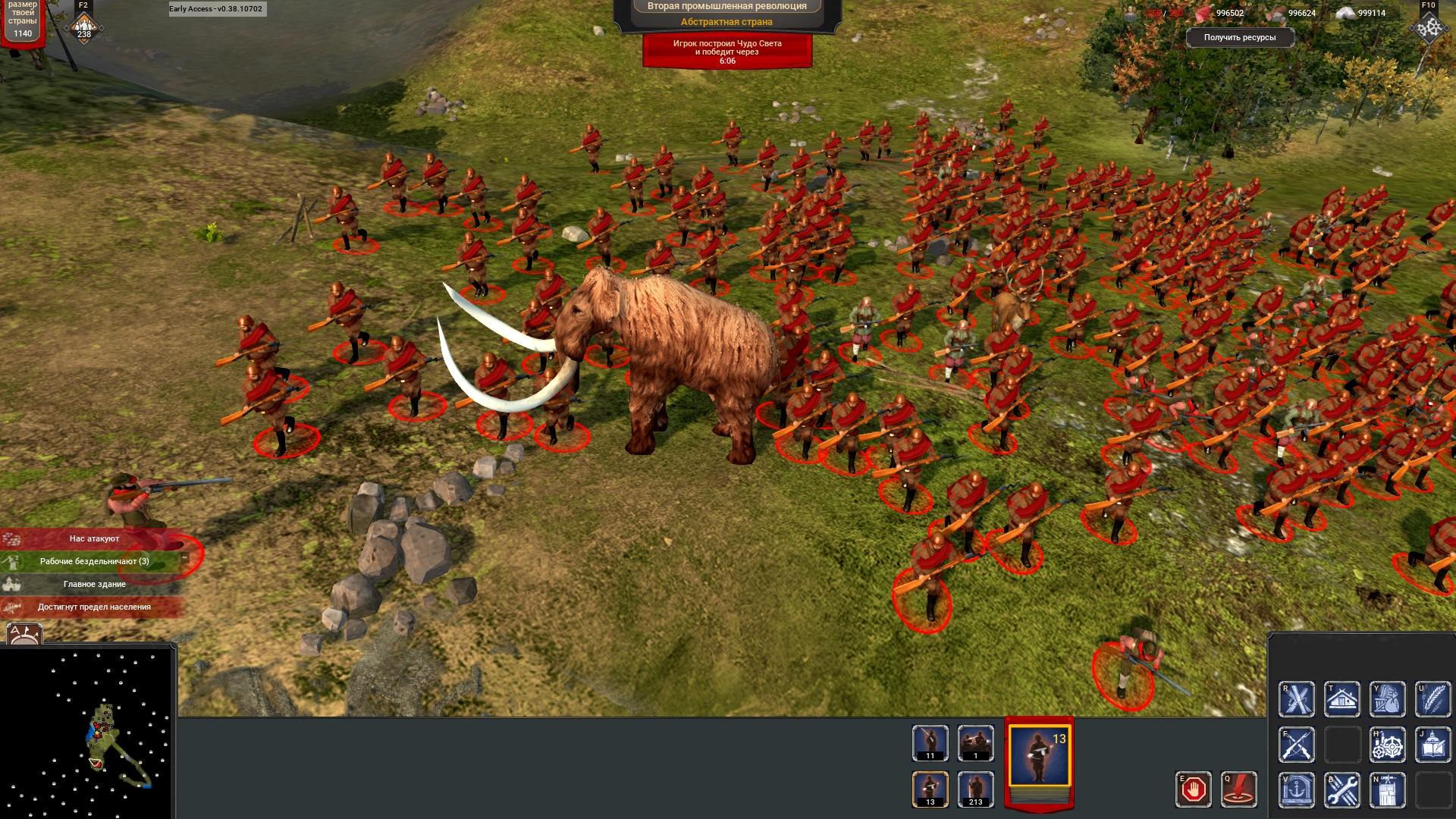 Achieving the maximum "epochal" development, you can build a miracle of light. As soon as the construction is ready, the countdown starts - you have to stand up and win in your pocket. True, it is a very expensive pleasure. You need to be a strategic genius to somehow evade enemy attacks, while investing all resources in development. In most cases, it will be necessary to spend an impressive part of the reserves to create a combat-ready army, otherwise the enemies will come and destroy all the peasants and the main building with impunity.

There are many wild animals on the map, which are inconvenient even in the late stages of development. Often there were cases when I sent workers to mine resources or to build another building on the outskirts of the city, and from nowhere tigers and mammoths attacked them. After such cases, I regularly built rifle-hole towers and hired five penny-pound policemen. 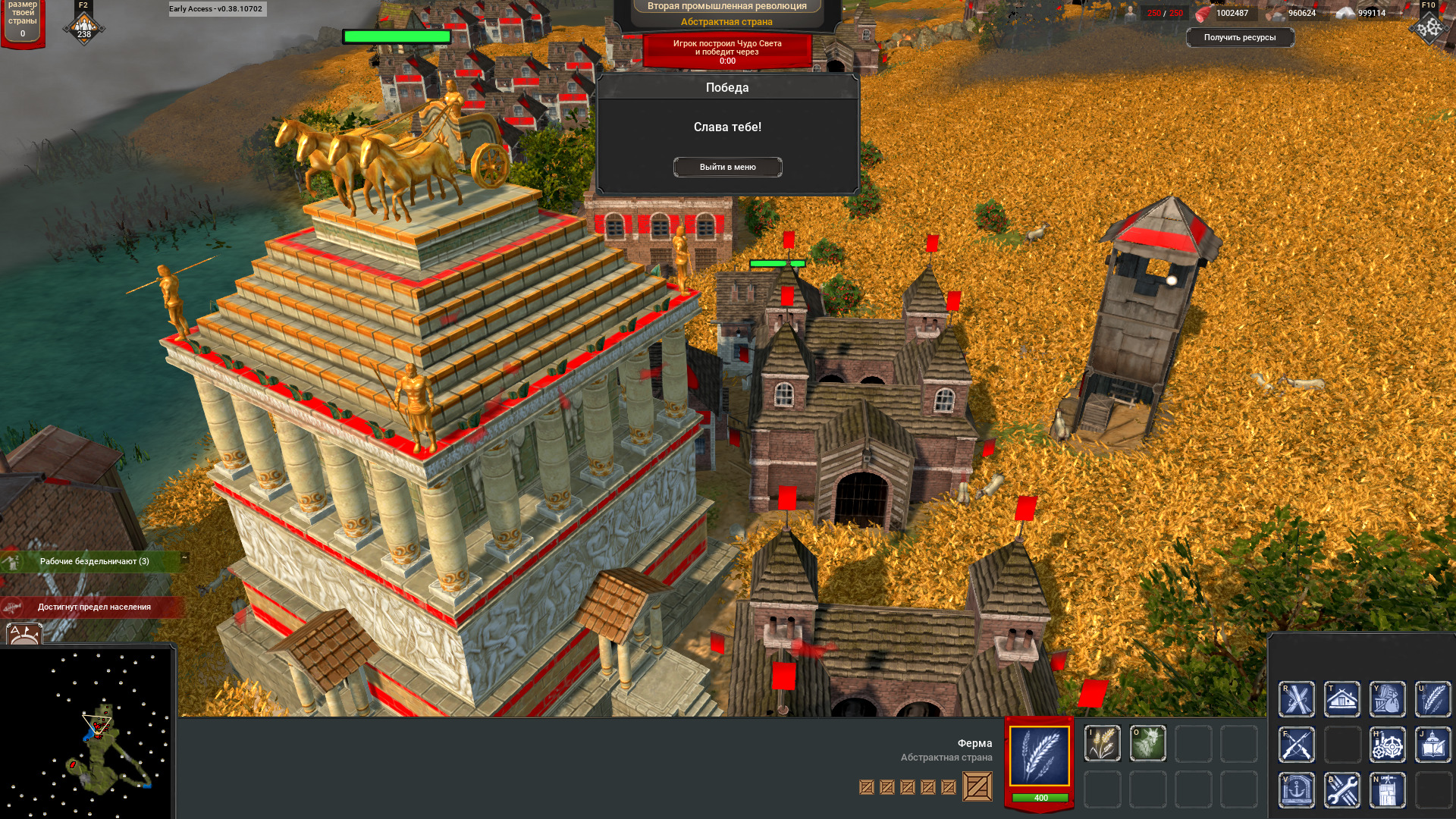 The success of development depends largely on where you come in. If you have fallen asleep close to your enemies, you are out of the question about any exit into economic development - war and only war. If you find yourself in a corner of the map, and even near a water body, you can safely fence yourself with a wall and grind "butterflies". And then live to tanks and nourish the other underdeveloped opponents.

Graphically, the game is somewhere in the Age of Empires 2 remaster level. Yes, not super, but the game is free and weighs less than a gigabyte! And also produces a stable 60 FPS on almost any system. In general, you need half an hour to get used to the visual and there will be no discomfort anymore. 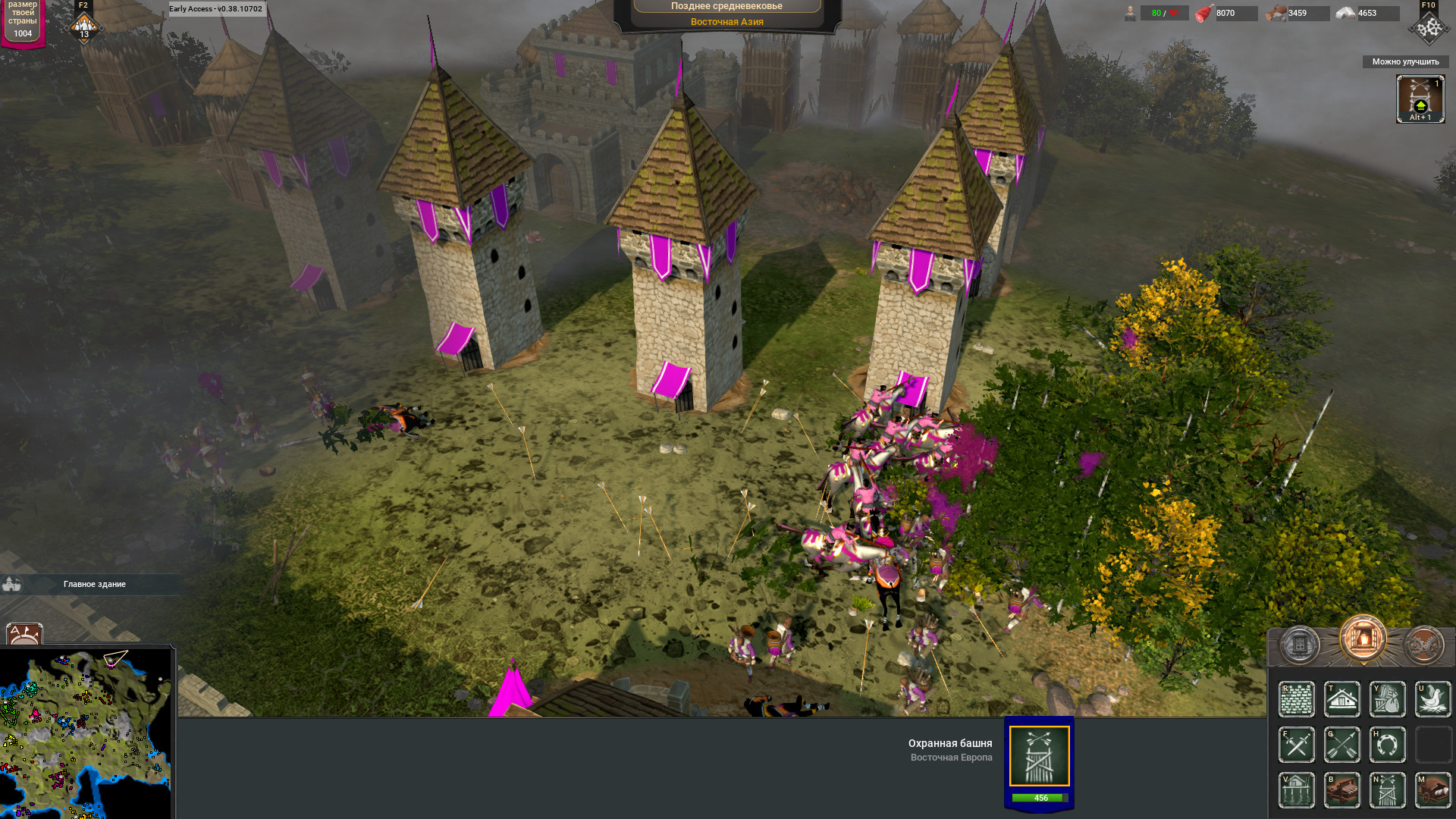 The atmosphere thanks to the pleasant soundtrack, good set of in-game sounds and integral style gets a stable four from me (on a five-point scale). And in the midst of the match, you plunge into the process with your head without thinking about graphics, performance, modern trends and other nonsense. The gaming process drags on, everything looks decent, more and is not required.

Now for the pros and cons of War Selection. I'll start with the pros. 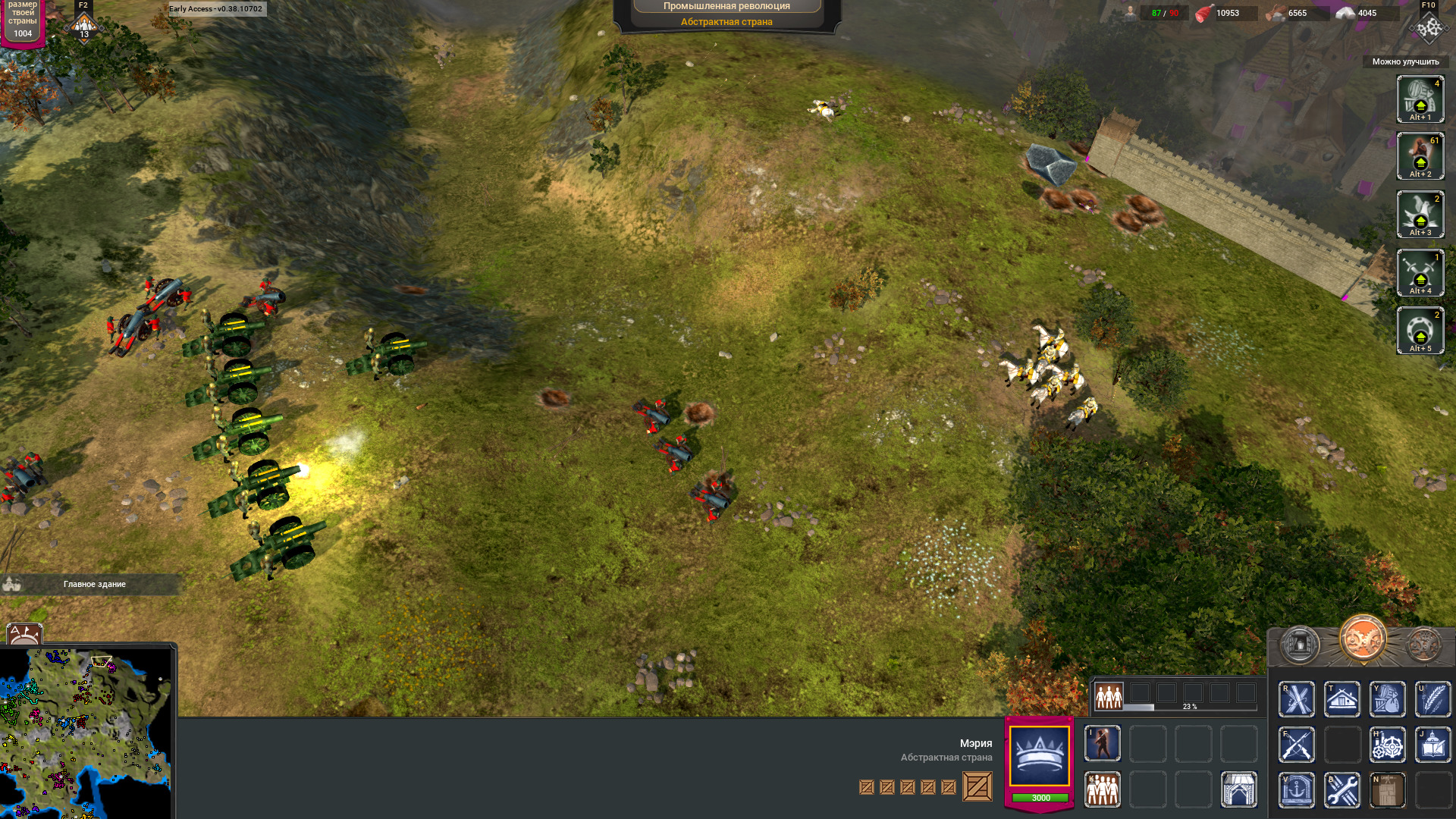 Free strategy in early access - I expected to see broken squalor. And as a result, I fell in love with this RTS. I furiously advise it to all fans of Age of Empires and just lovers to poke peasants' noses into wood. Now War Selection has 88 percent positive reviews out of 1600 - quite deserved! In addition, there are no hints of donations yet, except in the future paid lobby. Hopefully, pay-to-win will not add, the game has a very good potential.