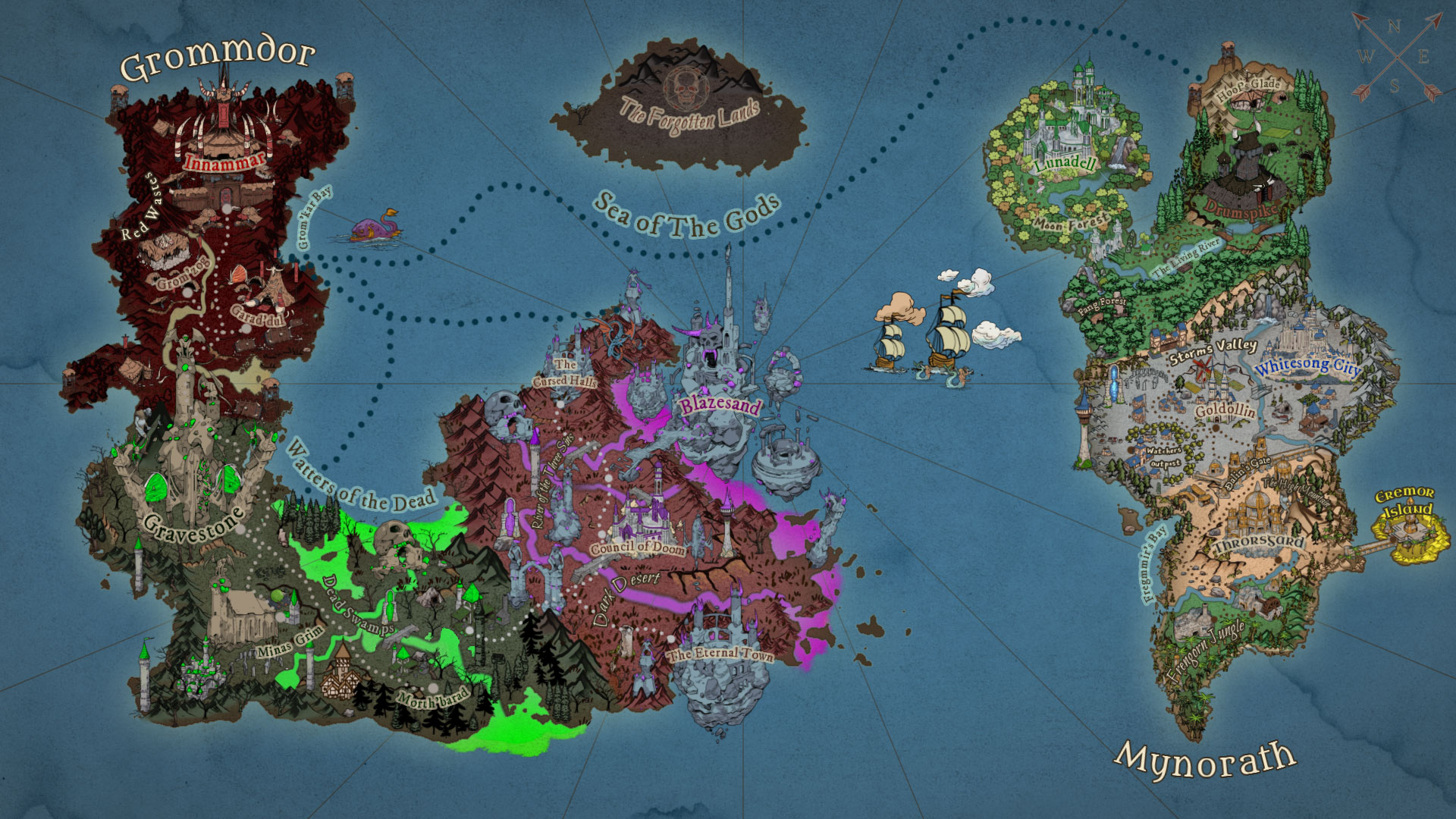 Is the area inhabited by the Human Race. The whole territory contains several small towns and the Capital of the Human Race - Whitesong City.

Before you find your way to Whitesong City, every Human character will begin his/hers journey at Watchers Outpost. This is the starting point of the Human Race.

On your way to Whitesong City you'll find yourself in Goldolin, a place of fair trade and many quests. Be aware some Thieves are lingering around that area tormenting the native population. You mighty hero will be needed there!

Fang Forest & The Living River
Fang Forest is a place where very few dare to be. A birth place of the mightiest, ferocious Bearan. These Bearans which managed to find their way in collaboration with the humans have shown the beauty of Fang Forest and the cures which it possess to the world.
The Living River is the only natural power which is capable of holding the mighty roots and thorns of Fang Forest away. North of the valley of The Living Rivers lays Drumspike, The Capital City of the Minotaurs. Northern of Drumpspike every Minotaur starts it's journey at Hoof's Glade, this is also the only place where races of The Domination can reach by water the lands of Mynorath and be in friendly territory.

Frengorn Jungle
This is the southern land of Mynorath. A place where all wild beasts feel home and live in harmony. Except the nature beings Frengorn Jungle is well populated with many wild tribes of outcasts from Humans and Dwarves. Outcasts which are living there to harvest the riches of the jungle, many diamonds and precious artifacts were found there... and many more to be found!

Red Wastes
Named like that with a reason. Nothing different than spikes and thorns is not growing on those lands. Dust and dirt is not a problem for a true Orc, that's why Red Wastes is the home of the Orcs!
A starting point for every brute or cunning Orc is Garad'dul, from there their journey begins. To reach their capital every Orc will stop by in Grom'Zog to drink a barell of Broz, to trade and duel.
North of Grom'zog in is the Capital City of the Orc's Empire - Innamar. The place where the whole Empire Gathers, where the most important decisions in the whole Domination union are taken.

Dead Swamps
Land where only the Dead are walking, where horrors and abominations are the rulers. The land which provides the Undead with their most sacred - The Grim Watter. The life supporting supplement of the Undead. Every dead Human washed with Grim Water is welcomed member of the Plague League.
One of the most important regions in the Dead Swamps is Morth'barad the starting zone of every dead Human. When the dead rise from the grave his way is only up from there, up to Minas Grim which is gathering point for the new members of the Plague League. A place where to every Undead is shown the path of the afterlife and how to take life from the ones which are yet living.

Gravestone
The Capital city of The Undead. Once a beautiful city of the Human race which now is nothing of what it once was. Crippled scientists working on disgusting experiments, ghosts and abominations guarding it's grave gates. Nothing enters Gravestone Alive, nothing get's out alive!

River of the Three Sins
This river is like no other. It strips the flesh of the bone on everyone else in which veins the blood of Griefthor is not flowing. The river is splitting the lands of the Dark Desert and protecting three important regions for the Infernal Demons - The Cursed Halls, Council of Doom and The Eternal Town.

Blazesand
This is the capital city of the Infernal Demons. There in the flying majestic halls is the throne of King Satanyr the current leader of The Domination. Blazesand is home city for only the finest of all Infernal Demons, the ones which took most from the living and gave it in sacrifice to the Chaos Gods. There the power of the Infernal Magic is glowing brightest and demonic beings are most praised.