For those who don't wanna read, you can get all this information in this video:

If you are suddenly faced with the problem: "I don't have enough gold", or rather coins in New World, whether it is to buy a house or new armor, or even a new bag, increasing the weight capacity, in this series of articles we will tell you all the best ways to quickly (and sometimes not really) earn gold coins in New World.

The first thing you should know is that there are exactly THREE ways to grind \ farm coins in the game:

Killing monsters, for the murder of any monster, you can get any number of coins, for the bosses in the dungeons offer the most 80-100, for example, for the passage of the first dungeon Amrine, for 2 bosses you get 84 coins from each or 168 for passage of a clean.

3. Trading with Other Players 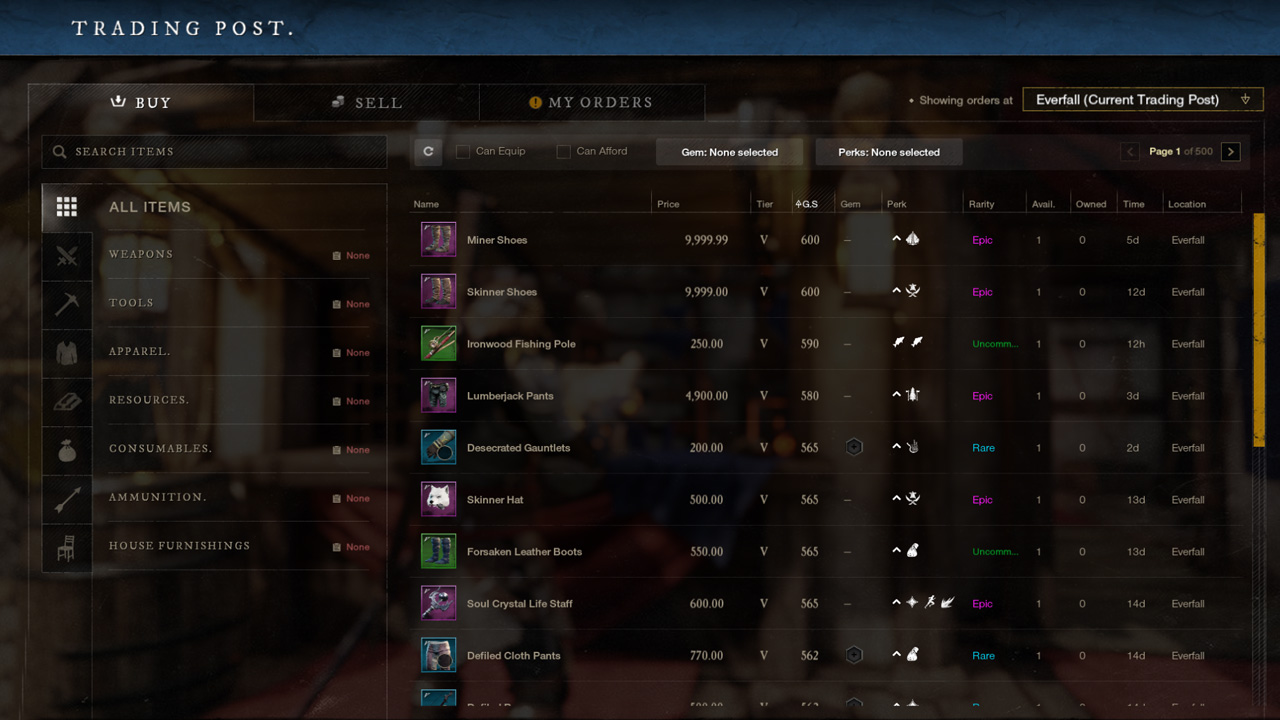 The third and most important way and will be the main one for you, as well as for all other players, Trading, mostly via Trading Post (You can learn how to use it here), it is one of the most important elements of the game, which is economy and by understanding it, you will learn the most efficient ways of making coins in New world!

The best way to make gold coins for new players

Such a way are undoubtedly FIVE gathering skills, namely the tier 1 main resources you get with them: 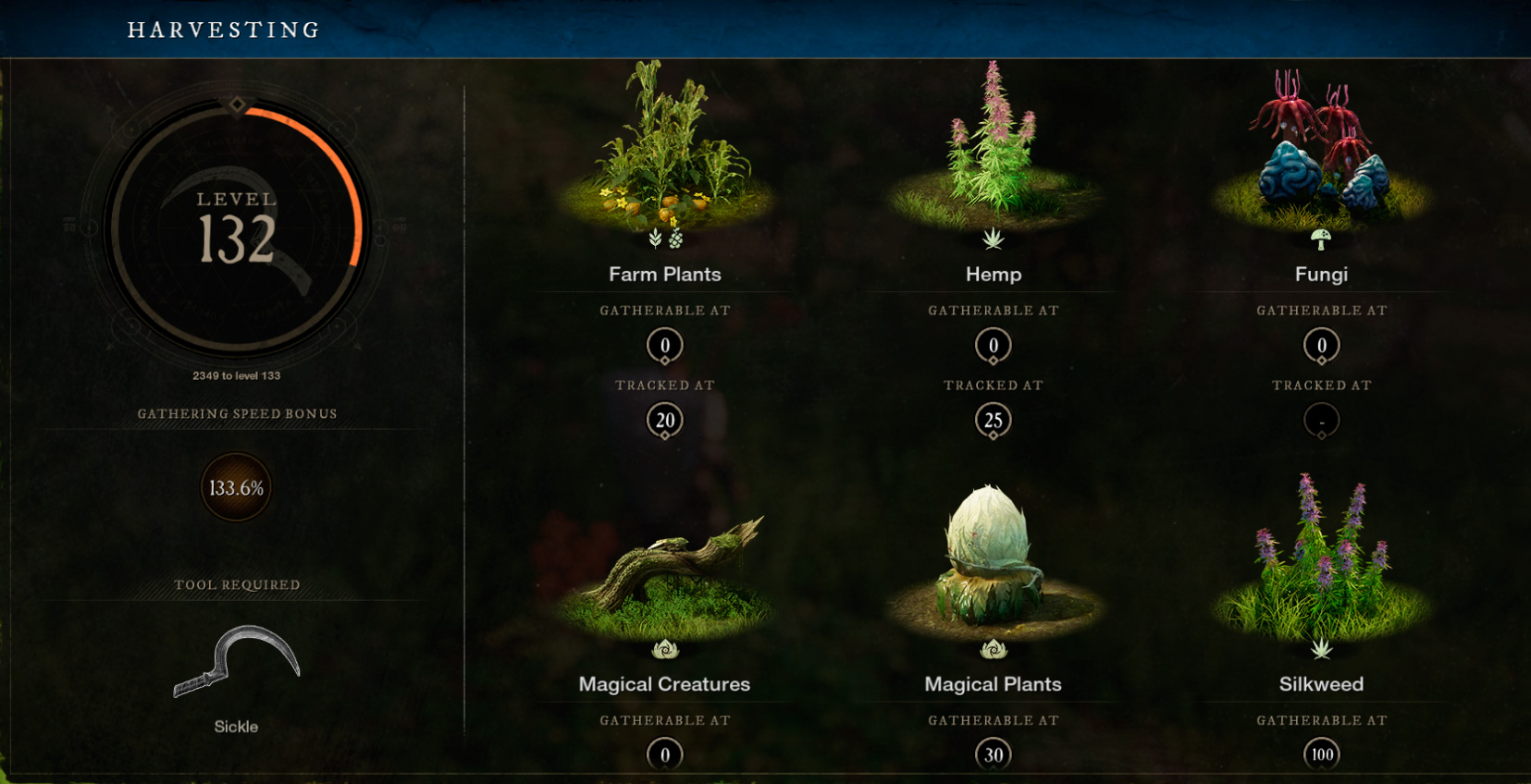 You should harvesting only one type materials, the easiest and most profitable of all, which requires 0 skill lvl, so you can harvest it from the very beginning and that is Fibers: 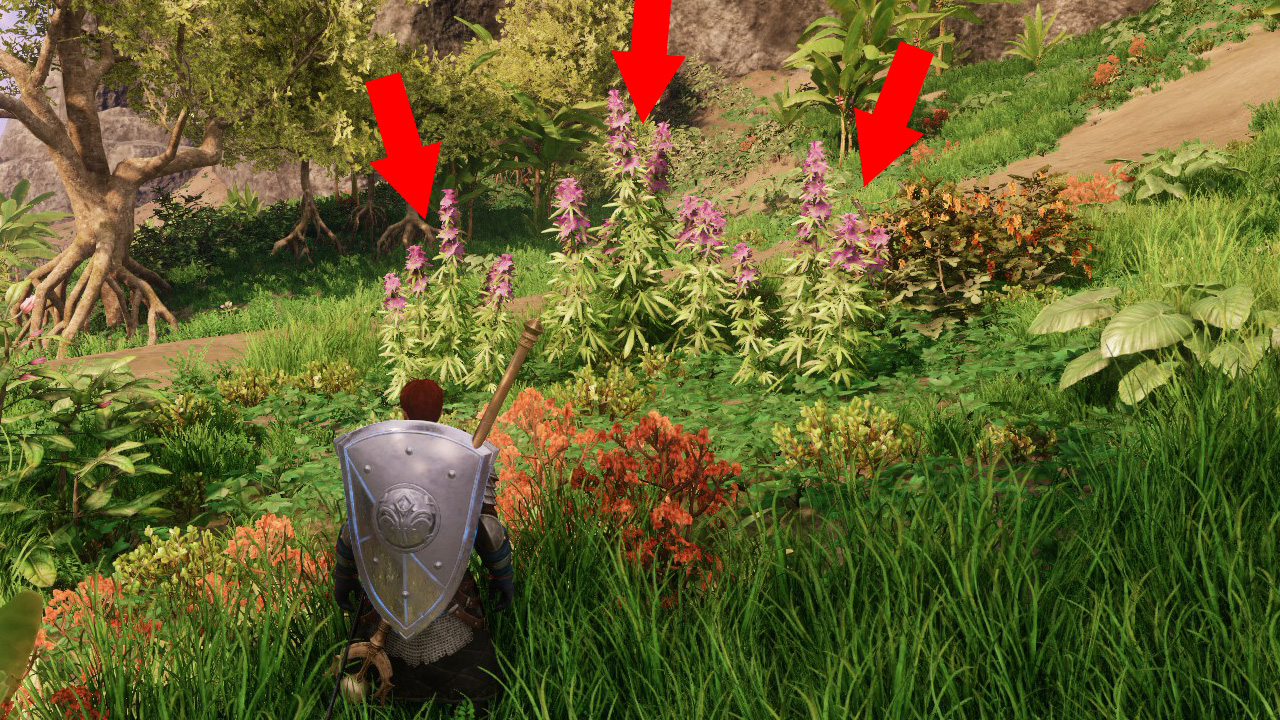 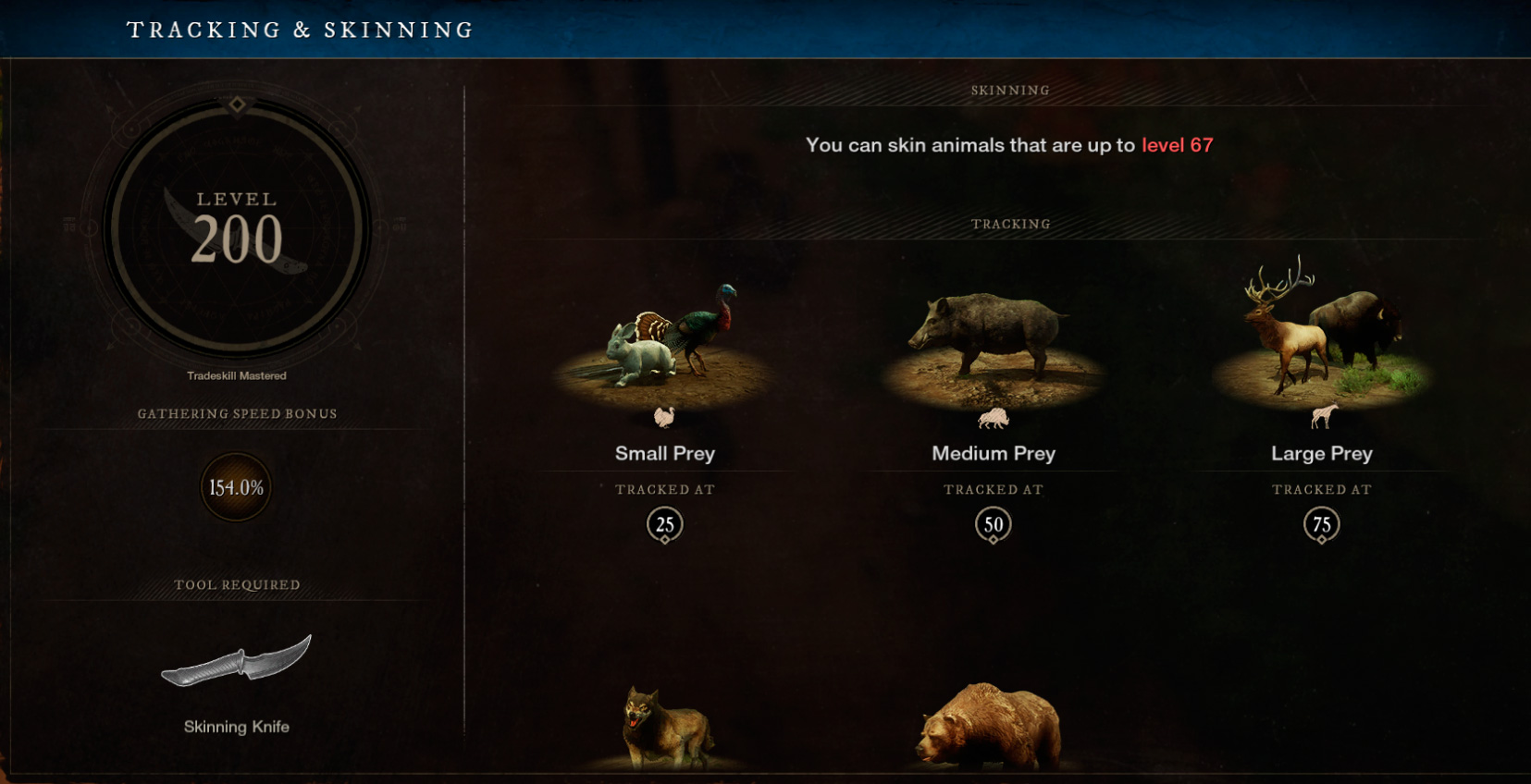 Rawhide is the first thing to get, but meat can also bring some income, depending on the demand on the server:

It can be obtained from all animals up to a certain level (up to about 40th level, with animals above this level will be getting Thick hide, most skin gives bison and stag (Large Prey) although Medium prey isn't half bad either, such as wolves and wild boars: 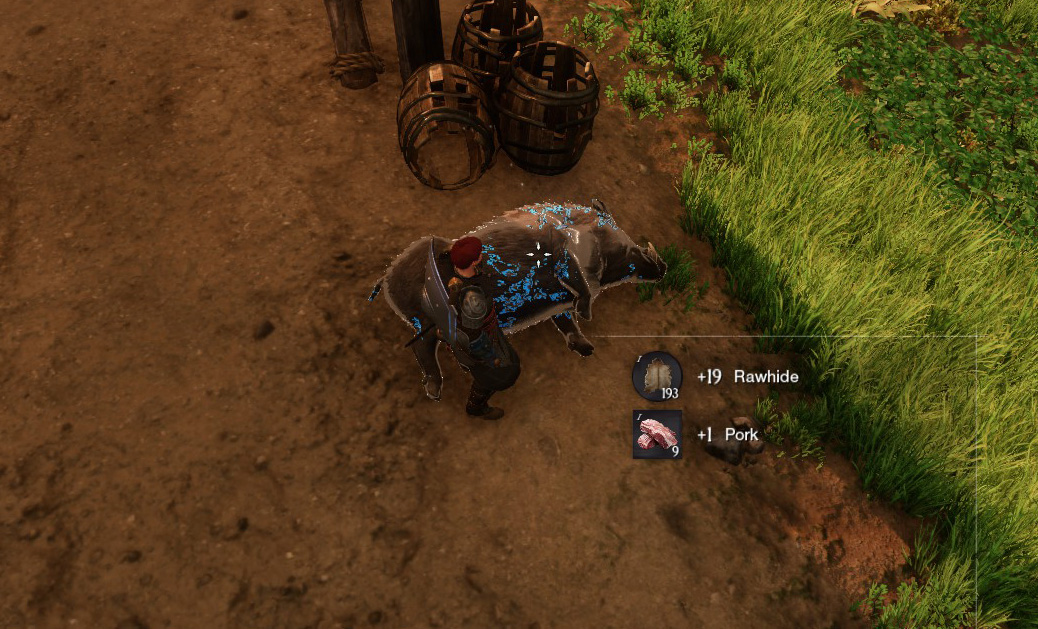 Besides boars and wolves do not run away from you so it's easier to hunt as opposed to bisons and deers. 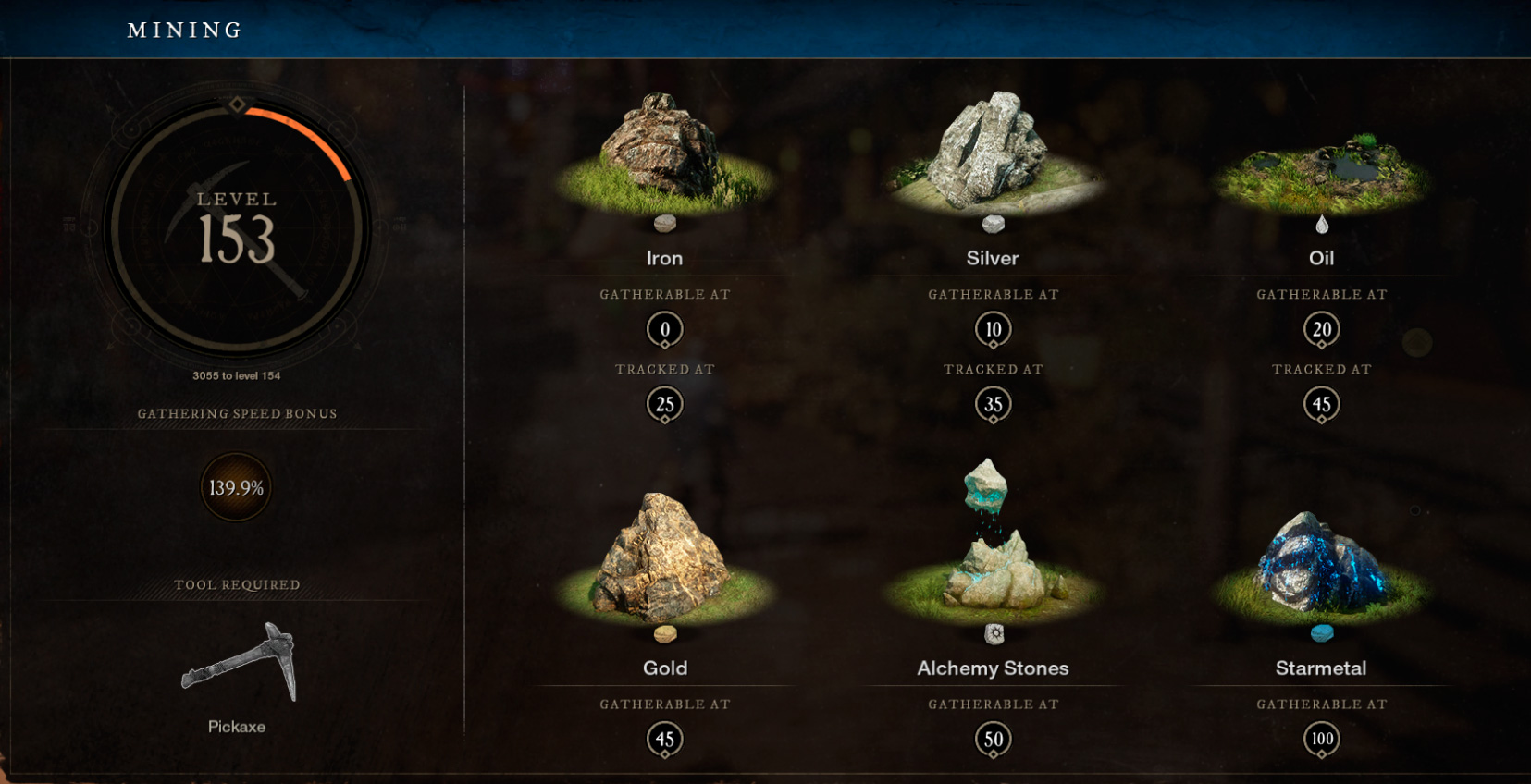 Mining is one of the best ways to farm coins, but only with iron ore; everything else costs practically nothing:

The iron ore nodes in the game look like this: 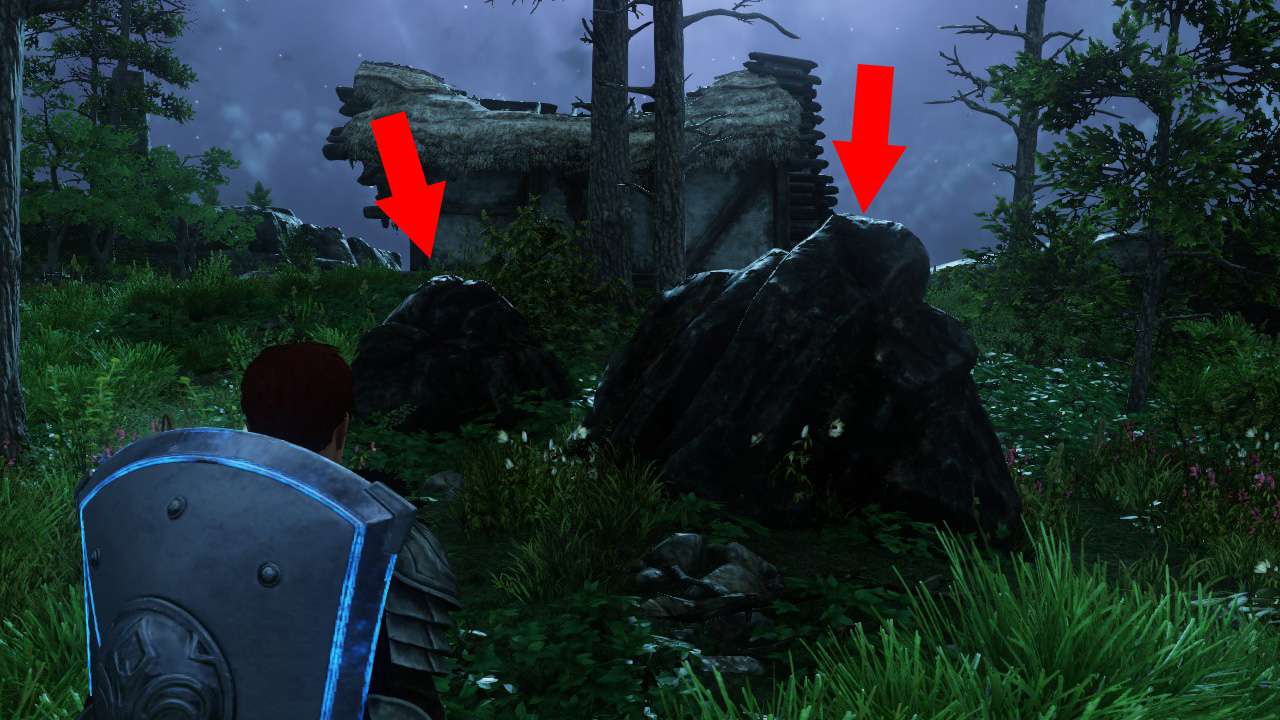 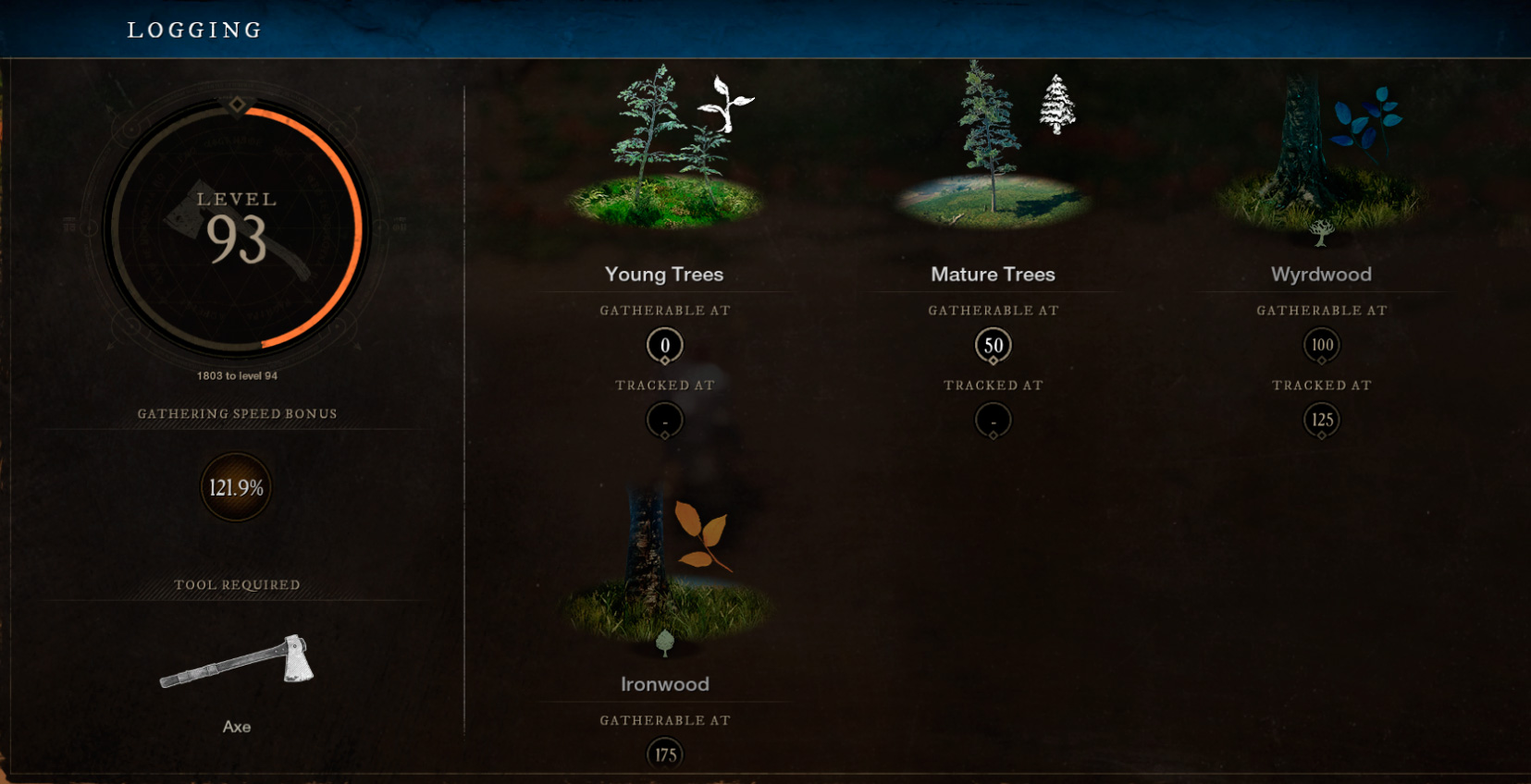 The best materials you can get are Green Wood, which is available at logging level 0, but depending on the server you might want to get Aged Wood, though it's unlikely to be more expensive than green wood:

You can get it from any tree that says Young Tree when you point it at: 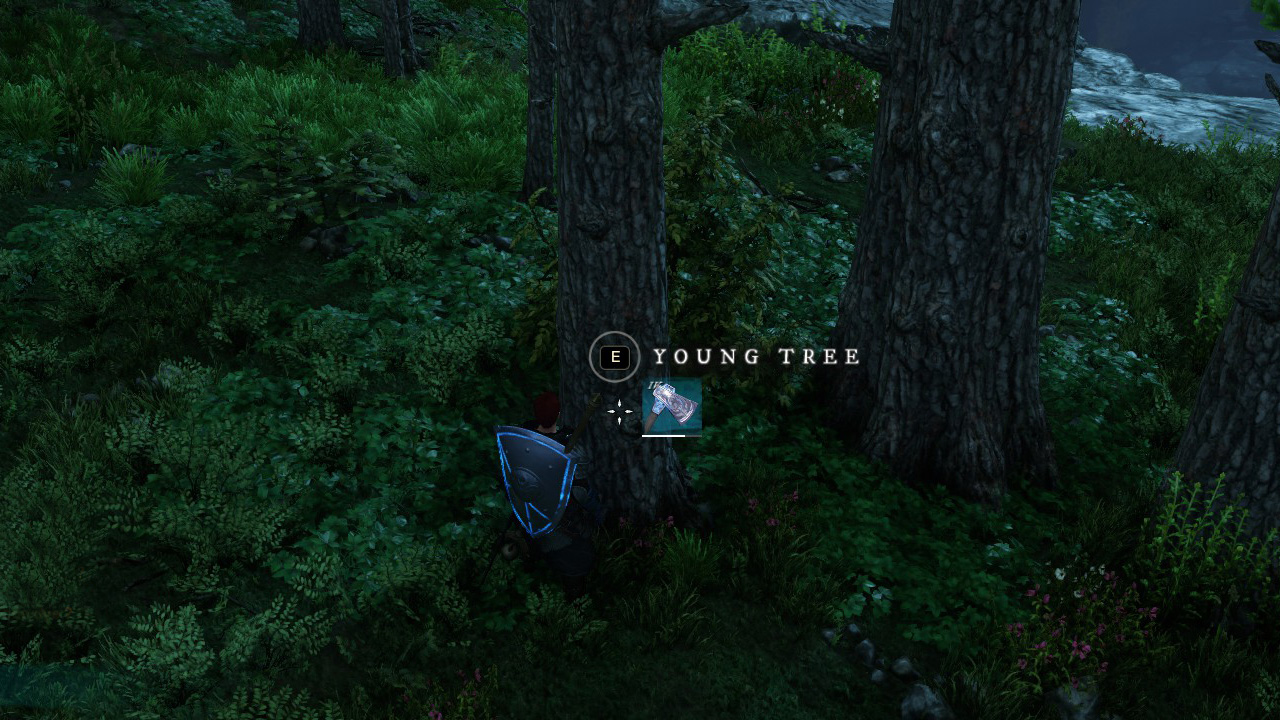 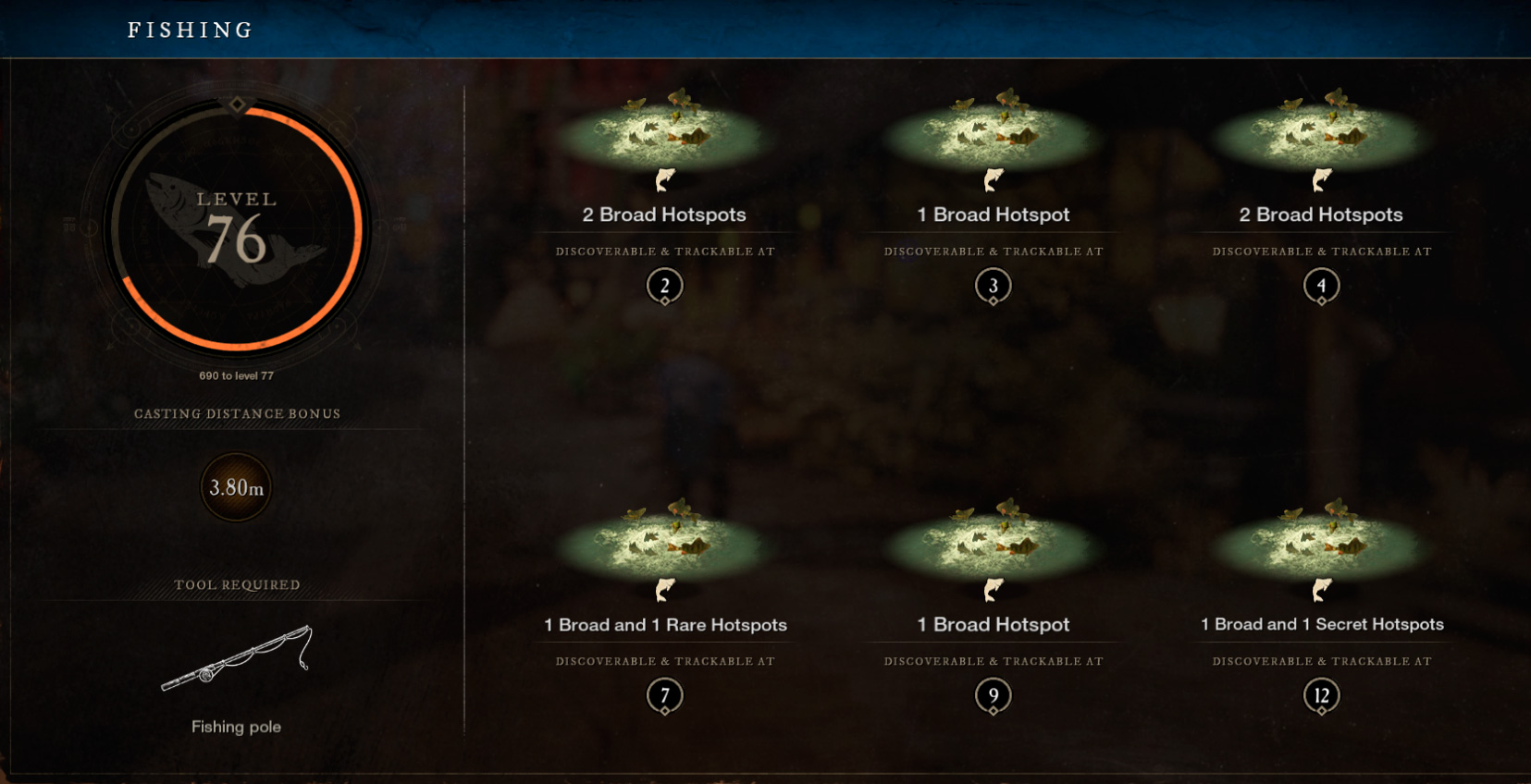 The most valuable that you can catch at the beginning (or at the moment), are medium and large salmon, perhaps on your server there is still a good demand for Fish Filet & Firm Fish Filet, Fish Oil, regional fish can be quite lucrative too, such as squid, clams, catfish, etc, but if it worth it to hunt it depends on your server's market.

Both Medium & Large Salmon can be caught in fresh water, as well as in salt water, it is desirable to have a rod, giving a boost for getting larger fish (Saltwater Colossus, Freshwater Colossus & Daytime Colossus, NightTime Colossus): 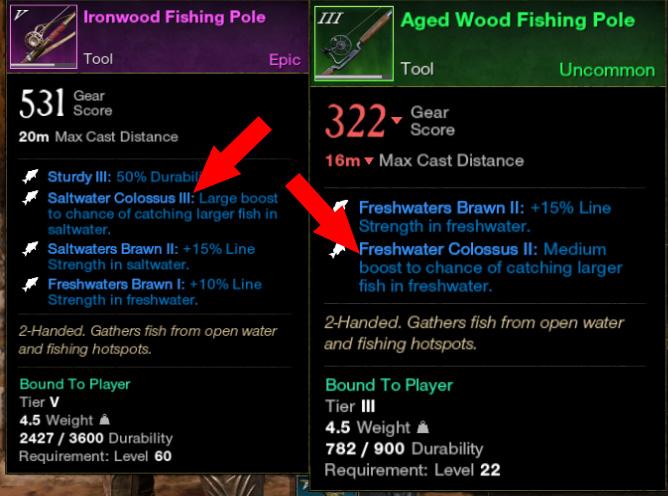 You can also you bait for boosting your chances at getting bigger fish, there are 6 kinds, 3 for fresh water: Meat bait, Clam bait, Oyster bait and 3 for saltwater: Fish bait, Snail bait, Electric eel bait, but keep in mind, your server bait may be worth MORE than the possible fish, so use it with caution! 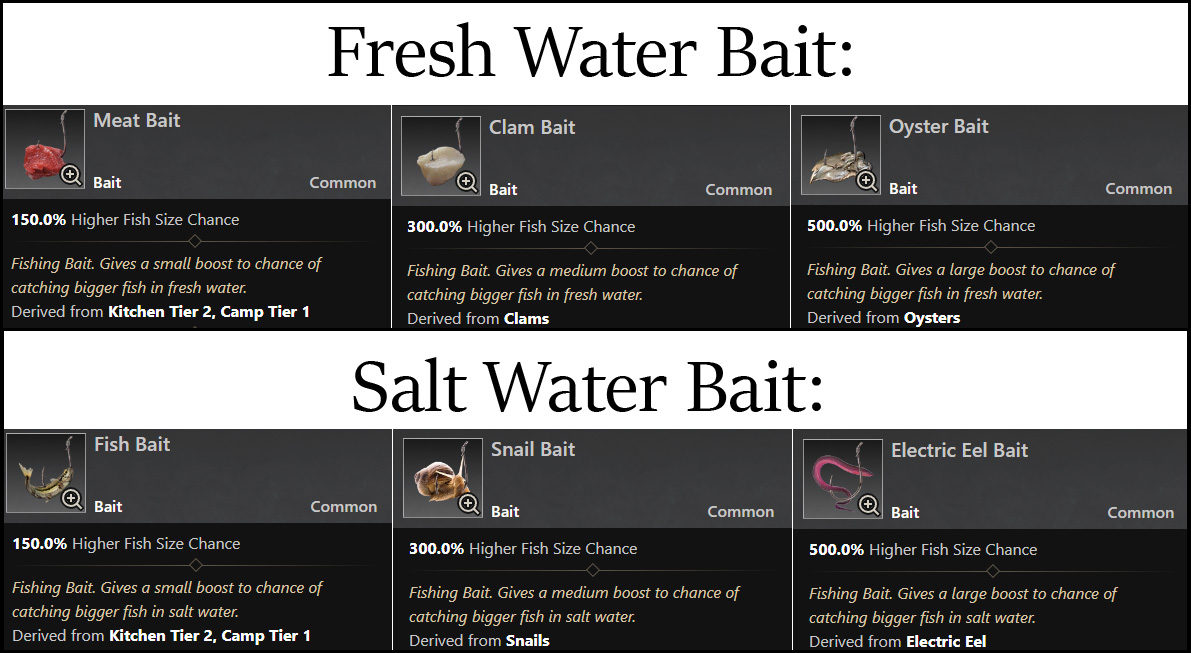 Also, according to my observations, a higher chance of catching Large Salmon is in Deep water, but it is still better to fish in Hotspots (you can learn about fishing hotspots here), because there is an increased chance of catching fish, and I advice you to fish in saltwater, where you can get clams & oysters, as they have pearls which are the most expensive gems in the game: 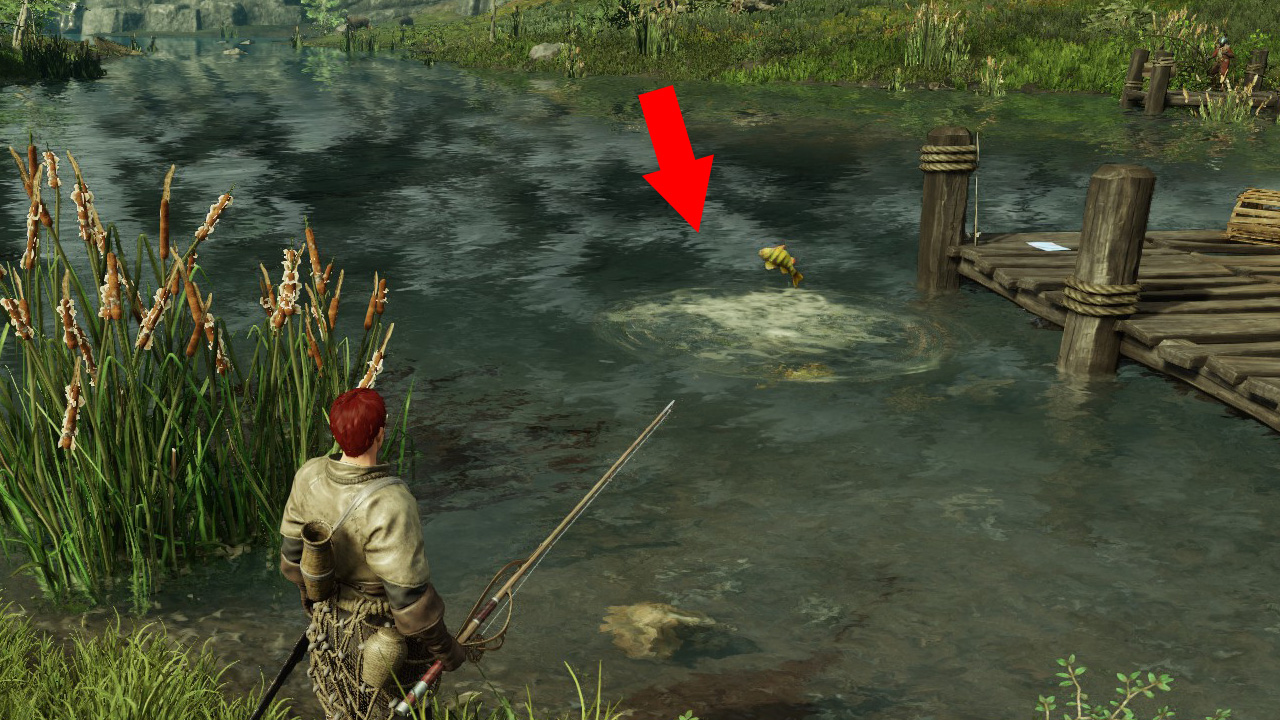 And most importantly, where all these resources can be found, for this you need to use the resource map of New World, there you can find all the necessary resources in the corresponding zones.