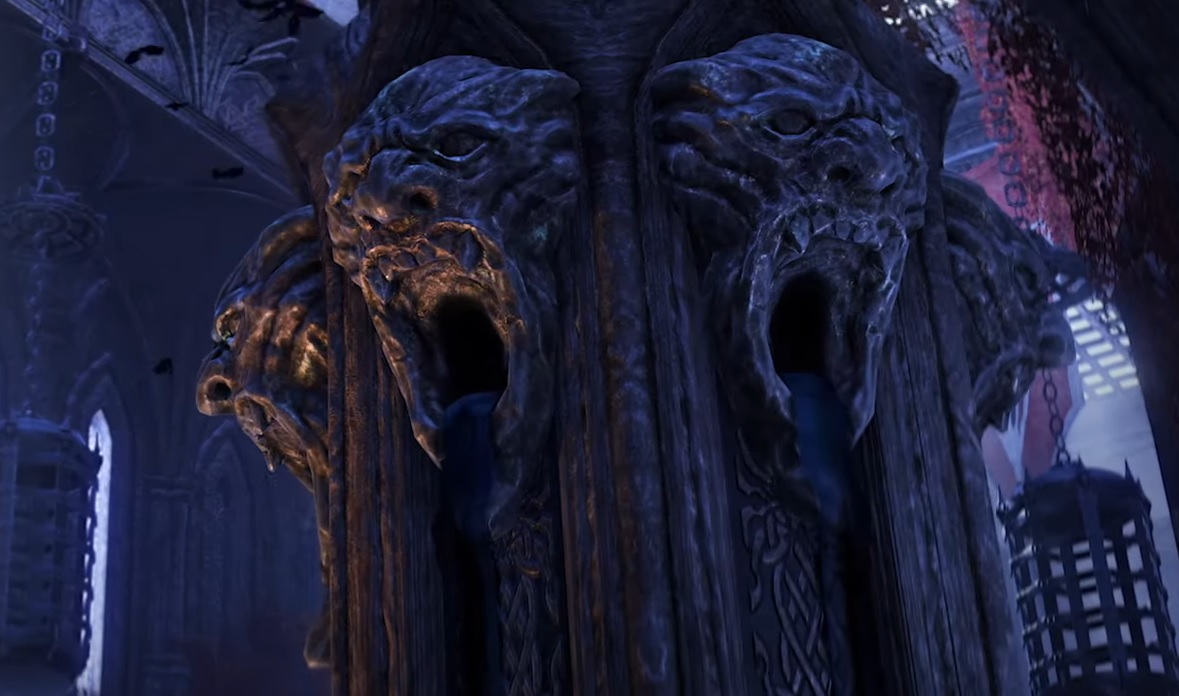 This is not the first time that players have to return to the snow-covered fields of Skyrim and plunge into the depths of the Dark Limit. A new chapter in the history of The Elder Scrolls Online Greymoor has brought us back north so that we can face a new threat.

Dark creatures, sleeping for centuries in the depths and lurking in the night darkness have awakened and are eager to enslave the North. More than ever, the world needed heroes. Nowadays, many of you are most likely to conquer the unpleasant snowy land and explore the dungeons in search of adventure to the fifth point or valuable relics.

In contrast to previous additions, the developers decided not to introduce a new class, preferring to radically rework a branch of vampire talent, as well as bloodsuckers and werewolves - this is the main leitmotif of the additions. In a fresh update to the game were added two dungeons, which plot continues the history of the additions. 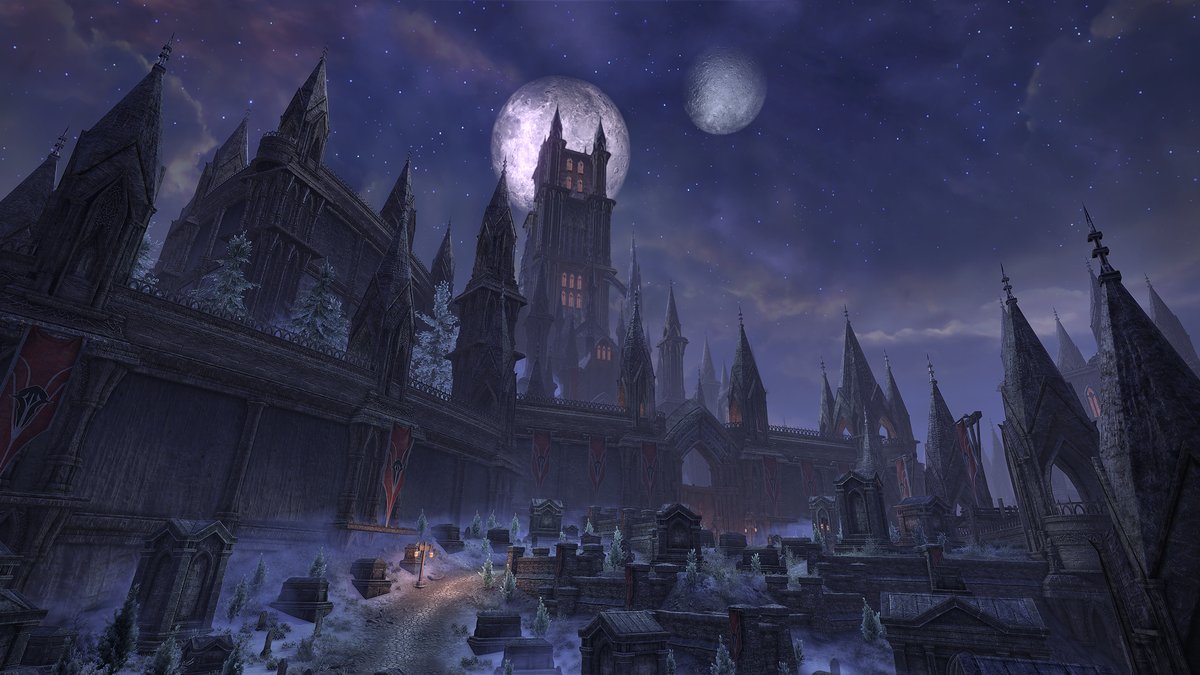 The first of them is the Castle of Shipov, where the corner is based on vampire themes and Gothic atmosphere, the second dungeon is called the Stone Garden and there the alchemist Arkasis conducts his crazy experiments on werewolves. It sounds quite intriguing, so when Comrad Rich and his team were offered to go on another suicidal adventure with a cheerful team - I could not stay away.

After mutual shuffling and patting, we decided to go to the tavern for a while, after all, there was a natural winter cold outside, and having drunk something hot, we began to plan further actions. I was offered to visit either the first lady of the highest vampire of its kind in the Castle of Shipov, or to hold aggressive negotiations with Arkasis that doping is bad and they should not pump werewolves.

Remembering my past adventures with flea creatures and scratching scars, I suggested walking to Lady Shipov. Still, the ladies should be allowed to go ahead. Having made a decision, we went on a visit. The road was long, but the evil spirit did not cause any problems for four hardened adventurers. On the way the guys talked about a new profession in search of antiquities, about the continuation of hard work to optimize PvP in Sirodyll.

Also a lot of attention was paid to the plot component. The developers don't want the dungeons to be perceived as ordinary caves and rooms where a fat boss with a KP pool stands and it is necessary to beat him regularly, because delicious things fall out of him. Their task is to harmoniously weave various dungeons and raids into the common history, so that they either continue the common global story or tell their fascinating story. By the way, the story about the confrontation in the vampire society, with which the plot of the Castle of Shipov is partly related, is not so bad, and for MMOs it is so great. That the cunning bloodsucker Talfik, that the daughter of Verandis in general cause even sympathy.

Gradually, the sun began to clone to the sunset, and before us there was a pile of castle. The atmosphere was maintained at an excellent level. If you have ever watched a classic Universal vampire movie in your life, you will feel at home. Full moon, a little fog, clouds in the sky, howling wind and the spires of the dark Gothic castle, where flocks of bats fly among the towers.

"The Shipov Castle is the home of Lady Shipov's recluse," says Mike Finnigan, a leading ESO battle designer. - A few years before the Graymour chapter, she began secretly assembling an army - and now she's finally revealed it to the world.

Having distributed the equipment, our brave group moved to the gate. Having broken through the ranks of the local undead, we reached the first boss, the gatekeeper. It turned out to be a giant undead dog, the Terrible Tindapra. Fighting, as well as typical for the starting boss of the dungeon in general, is simple in mechanics. We kill addicts, saw the boss, dodge the AOE. The monster is defeated, we continue our journey. 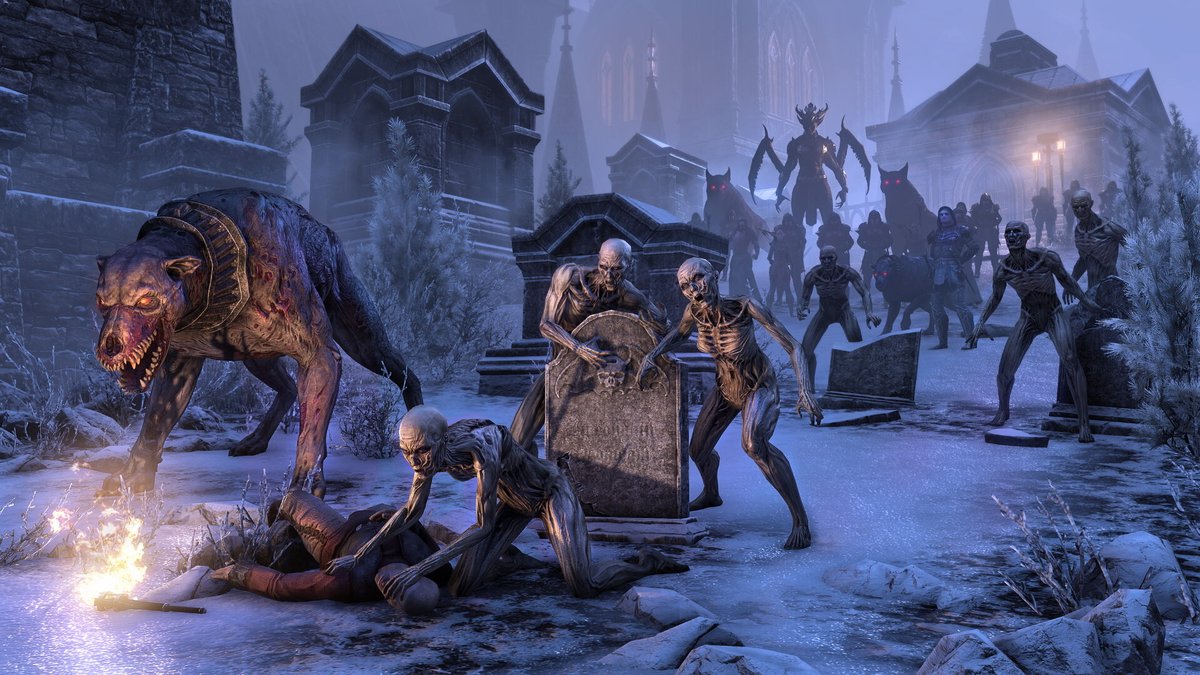 The interior of the castle is tastefully designed. You can see the work of interior designers, you can see a bunch of little things that are somehow associated with this place and tell their stories. After a short admiration of the interior decoration, we moved to the next boss, who was Bloody Twilight. An unusual essence, apparently consisting of magically bound together blood, became our second opponent.

Unlike the Hellhound dog, this comrade turned out to be a more serious opponent and required a little more coordination and attention. The empty pool, in which the boss appeared, foreshadowed trouble and, as I thought, it turned out to be a trap. The boss had an extremely nasty habit to teleport on the battlefield, calling mignons from his blood, which cheerfully restored him to health. At a certain point of the battle, the boss flies into the center of the room, fills the pool with blood and calls his phantom copy to fight against you.

And here comes an important moment in the battle. First of all, it is necessary to kill a copy of the boss as soon as possible, and secondly, you can not be close to the edge of the pool, otherwise the boss will attract you to himself and until the hero does not get out of the pool, his health will decrease. The phases alternate with each other until the victorious end and the unspeakable death of the boss.

After refreshing Bloody Twilight, a formidable group of adventurers went further into the depths of the castle. Having destroyed another pack of vampires and goose, we came across resurrected vampires. It sounds strange, but the raven ghost Vadorot has taken over the power that can resurrect vampires and turn them into an even stronger and uglier undead. He is also the next boss of the Castle of Spires.

"The enslaved crow's ghost Vadorot will be a worthy opponent for you," Finnigan says. - Former servant Nocturnal, now obedient to the will of Lady Shipov, he is able to give strength and "resurrect" vampires fallen in battle.

In the laboratory of this creature, which has lost its human form, on hooks and tables for vivisection are killed vampires, animals and humans. Any living material goes on experiments to learn the essence of death. Hanging carcasses immediately attract attention, and not in vain. They are an important part of the mechanics of combat. 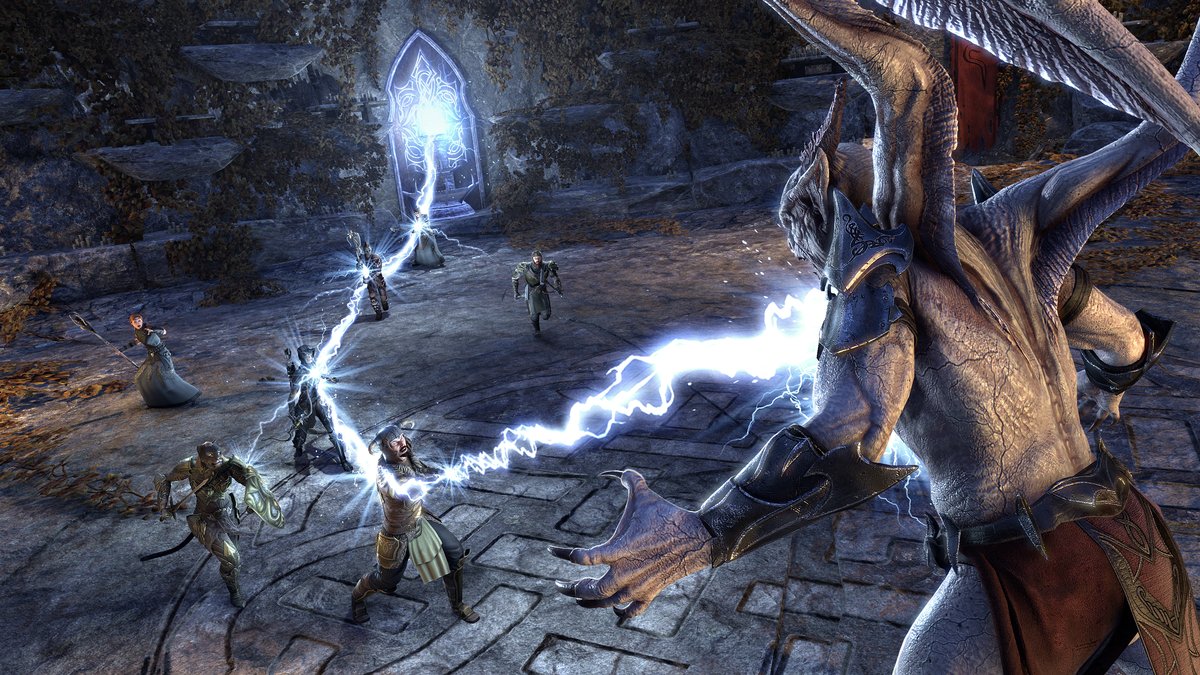 Fighting at first glance seems confusing, but at the heart of its logic and requires only some coordination. If there is an entrance zone under the group, you should disperse, if magnetized into a Vadorota sickle, you should attack it, and then throw this sickle into one of the suspended carcasses to call very necessary for the battle live slime. If you look closely, not all the carcasses are the same, and among them there are those that are in higher priority to shoot down, but I will not spoiler - to guess what is quite simple.

After the glorious victory, the brave group of adventurers had to weed the rows of reviving gargoyles and ubiquitous vampires. Lady Shipov gathered an army worthy of respect within the walls of the castle. And finally, we went to the local pogost. The moon, half-open by clouds, the howling of werewolves in the distance, open graves and rumbles, devouring the dead. Beautiful idyllic landscape. After dirty work on the return of the defiant inhabitants to their place of permanent residence, we reached the dirty traitor Talfik.

The latter, since our last meeting, has gained strength, matured and gained support in the form of gargoyles. The battle is quite tactical and its success depends on the tank. The boss stands in the center of the circle, and there are statues of gargoyles along the perimeter. Some of them have red eyes, others are blue. The former possess fire magic and hit hard from a distance; the latter prefer the magic of ice and close combat.

After the beginning of the battle, having received a certain percentage of damage, the boss casts a spell that awakens the statue. The task of the tank is to deploy the boss so that the right gargoyle gets into the radius of the spell, which is a straight line in the direction of the boss' sight. In normal mode, the boss wakes up only three gargoyles, and in the veteran test, all gargoyles are activated during the Talfik's assassination.

We spin the boss, activate the right gargoyle, kill him, beat up the boss and do not get into the entry zones. It may look difficult from the outside, but in practice the minimal played group will not have any problems.

After the fall of the traitor, there are no obstacles between us and Lady Shipov. It's time to put an end to this Army of Darkness and save Skyrim from the invasion of the bloodsuckers. Good to go did not have to go too far and broke through a little resistance, our group got to the Cathedral, which settled the main vampire.

Should make a small reservation, this lady was not an ordinary bloodsucking creature, like other vampires. It was a full-fledged vampire lord, and in fact the only one of these women. The Red Book, of course, will not approve, but it must be done.

Entering the hall, you can see the Lady Shipov, cutting the air on her wings, which after the beginning of the battle slowly descends from heaven to earth. After the beginning of the battle, the boss dances in the center of the room, while the others dodge bloody spheres. After receiving a dose of damage, Lady Shipov turns into a cloud of bats and calls the servants. We dodge the mice, and we quickly kill the called goose.

Then we repeat the previous phase with bloody spheres. Then Lady Shipov soars into the air and the next phase begins. The whole group runs into a green circle, which begins to move around the room. The task is not to leave it to avoid a huge cloud of bloodsuckers, which the boss calls. In the process of moving inside the light zone, the boss will periodically conduct attacks from the dive, causing damage to himself. The task is either to block the attack or to duck. Along the way, Lady Shipov will call the minions, it is desirable to kill them quickly, and then standing in the place of their death to throw a clot of blood into the boss. Having received a certain amount of damage, the boss returns to the first phase, with the addition of short-term teleporters around the hall. Then it is repeated phase two with mice and phase three with entering zones. And so until victory. 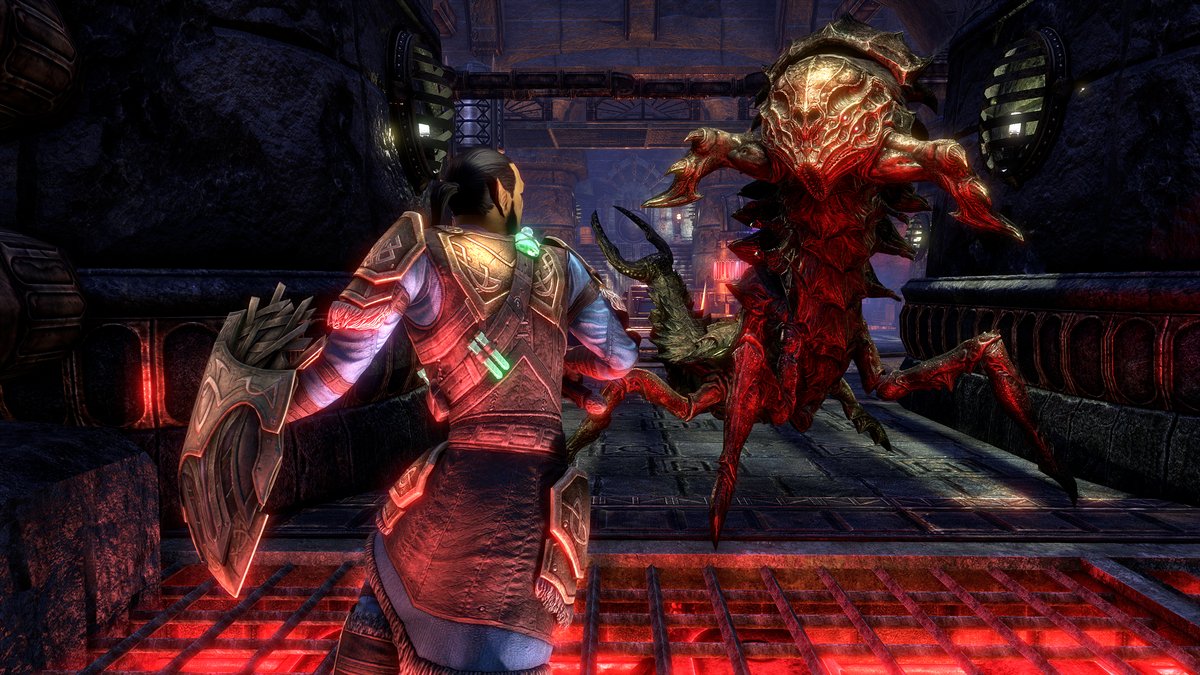 The fight itself is quite active with a lot of movements, and at the same veteran level of complexity will require decent coordination from the group. In the meantime, I can say from myself that the dungeon developers managed. The location is atmospheric and gloomy, perfectly transmitting the vampire nature. Bosses will not say that it is too difficult, but in a healthy way will make you move and actively use the whole arsenal of abilities of the character. The plot component is not bad, as well as the dungeon design in general.

Special thanks to the development team for the exciting journey and I hope this is not our last adventure in the world of Ancient Scrolls.